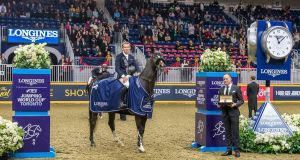 Just four of the 22 starters went clear over the 1.60m first round track designed by Canada’s Michel Vaillancourt and, last to go of the quartet over the shortened track, 24-year-old Allen set the fastest time of 34.70 on GK Casper which is owned by his family’s Ballywalter Farm.

“That’s what it’s all about,” said Wexford native Allen. “Everyone wants to win the Grand Prix, last to go, in front of a full house. It was one that I really wasn’t expecting, so it made it all the more sweet.

“I was struggling a bit in the first round - all week to be honest,” continued the Germany-based rider. “Casper went in on the first day and he was very spooky. He wasn’t supposed to come here as my top horse, as I was meant to take another one, so he had to step up a bit. I knew if I got the first round behind me, I wouldn’t have to worry about the jumps as much in the second round. I could really give it a lash.”

Commenting further on the Holstein 11-year-old, Allen said: “He has always been fantastic. He’s a very good jumper and very careful. It has taken him longer to get to this height as, for most horses, their first season doing this level is as nine-year-olds; this is his first season now. I’ve always said that whatever he can jump, he can win. I knew he could be very competitive over here for these few weeks. He had been jumping fantastic but we were just missing that last bit of luck. It all came through today.”

Earlier in the day at the four-star show, Shane Sweetnam finished third in the 1.40m speed class on Karlin van’t Vennehof while, earlier in the week, the Cork native partnered the same Belgian Warmblood mare into fifth in the 1.45m jump-off competition won by Derry-born Daniel Coyle on Ariel Grange’s nine-year-old Dutch Warmblood gelding Farrel (31.85).

In Saturday’s world cup qualifier in Thermal, California, Captain Brian Cournane failed to qualify for the jump-off with his own and Penelope Stiller’s Penelope Cruz. On Thursday however, Kerry native Cournane had won a 1.50m jump-off class with the Irish Sport Horse mare, an 11-year-old Ustinov bay which was bred in Co Derry by Liam McKee out of the Askoll Peter Pan mare Tendelin.

Irish show jumping riders are also competing throughout Europe this weekend with the best results to date coming at show held in the Iberian peninsula.