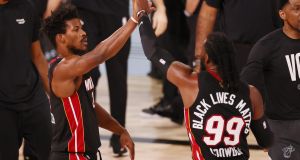 Jimmy Butler and the undermanned Miami Heat breathed new life into the NBA Finals with a gritty 115-104 upset victory over the Los Angeles Lakers on Sunday that cut the best-of-seven series deficit to 2-1.

The Heat, well aware that no NBA team has ever come back from a 0-3 series deficit to win in seven games, squandered a 14-point third-quarter lead but dug deep in the fourth to avoid being pushed to the brink of elimination.

“I think we realised that we belong,” said All Star forward Butler after recording his first career playoff triple-double with 40 points, 13 assists, and 11 rebounds.

“They can be beaten as long as we do what we are supposed to do.”

LeBron James had a team-high 25 points for the Lakers while Anthony Davis, who was a dominant force in the first two games of the series, got in early foul trouble and lacked rhythm as he managed just 15 points.

Miami, without injured starters Bam Adebayo and Goran Dragic for a second consecutive game, built a 13-point lead out of the gate but the Lakers clawed back to within four points after two quarters despite 14 turnovers.

The Heat opened the third with a 10-0 run to build another double-digit lead and while the Lakers missed their first seven shots of the half they fought back to lead 91-89 with under nine minutes to play.

Miami needed someone to step up and Butler answered the call with eight consecutive points as the Heat pulled away.

“He did everything that they needed for him to do tonight and he came through big time in a big-time game.”

This year’s NBA Finals will cap a season unlike any other as play restarted in July after a four-month hiatus with all games held at Disney World in Florida to limit the risk from the novel coronavirus.

Game Four is on Tuesday.