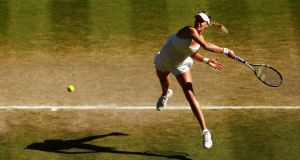 Wimbledon continued to enjoy the rise and rise of Canadian Eugenie Bouchard. On the hottest day so far and with a new face to contest the final against 2011 winner Petra Kvitova, one semi-final fell hopelessly away from Lucie Safarova, the other injury-hit and similarly unbalanced, with Simona Halep literally tumbling out.

The tournament will be aching for something more dramatically competitive on Saturday. It will want three sets and it will want both Kvitova and Bouchard, despite being a 20-year-old novice, to inflate the Centre Court,

It has been a feature of the women’s competition this year that some players have fallen easily in the second sets, although in Halep’s case yesterday, her fate was largely determined after twisting her ankle early in the match before losing 7-6 (7-5) 6-2 to Bouchard.

The Romanian gamely used her Monica Seles-like movement and big double-fisted backhand to subdue Bouchard in the backcourt and earn a deserved early break of service, threatening to race off in the opening stages.

Halep served for 3-1 but Bouchard turned the game to break back and draw level 2-2. It was during the fourth game that the world number three twisted her ankle sprinting wide for a backhand return. Her foot skidded on the grass before abruptly stopping and the jolt turned her ankle. The medical trainer was called at the break and the 22-year-old sat helplessly musing over her ill fortune while the doctor heavily taped her foot. ‘Big pain’ “It was difficult to continue because I twist my ankle and was very hard,” said Halep afterwards. “I felt a big pain in the moment, but then was better with the tape. But still I couldn’t push anymore in my leg. My first serve was really bad after that. Yeah, it was difficult to continue with another injury.”

It was ironic as seven-time Grand Slam champion Mats Wilander noted how Halep could change direction sharply, comparing her movement to that of Novak Djokovic.

“Is it hard to stay focused, to play every point, because you are a little bit afraid after injury,” she added. “I think I played till the end, but in second set I lost my energy and I couldn’t believe anymore that I can finish the match in the right way for me.”

For Bouchard it has been a stunning year and a triumphant step forward in the senior ranks as she became the first Canadian to reach a Grand Slam singles final. Tall and blonde, she’s also a marketing dream for the women’s game with her photogenic looks, athleticism and confident, positive demeanour.

She has an intelligent sense of fun, also batting off Justin Bieber questions with light hearted humour. That and a rod of steel running down her back bone.

She has already been compared to Maria Sharapova and Ana Kournikova, although pointedly ignored the Kournikova comparison. Junior champion Kournikova won a million hearts but very little else.

“I see it two ways,” Bouchard. “I see it as a compliment to be compared to someone like Sharapova who has won five slams. I see it in a positive light.

“But also I’m my own person. I don’t want to be, you know, the next someone else. I want to be the first of me. I’ll try to make my own history.” Second time Play was held up for a second time in the first set tiebreak when a fan was overcome by the 30-degree heat and had to be helped from the courtside seats. Thereafter it was 34 minutes of struggle, Halep two service breaks down and finally struggling to a 6-2 defeat.

Bouchard will also rise to number seven in the world rankings, the highest position ever achieved by a Canadian player.

Lucie Safarova gamely stood up to her Czech colleague Kvitova for 51 minutes. The 27-year-old left hander, ranked 23 in the world and who had never before gone beyond the third round at Wimbledon, pushed the first set to a tiebreak but couldn’t contain Kvitova’s surge in the second.

The younger player Kvitova, has grown over the two weeks and even showed a willingness to approach the net, winning the point on the five occasions she came off the baseline. Kvitova brought a 5-0 record with her to the match and after the first set picked up her level, Safarova disappearing in the rear view mirror.

Playing from the back Kvitova won 83 per cent of the points, the left-handed cross court forehand a point collector that Bouchard will have to temper.

It’s the first time Kvitov has kicked on from her Wimbledon win of three years ago. While she didn’t vanish, she hasn’t won another major since then. ‘Three years’ “I think these three years was really up and down,” she said after her 7-6 (8-6), 6-1 victory.

“I knew that a lot of people are expecting from me something more than I did probably. But on the other side, I was still in the top 10.”

If intentions after semi-final matches have any influence on the outcome of finals, it was Bouchard who left the deepest impression when she was asked about her remarkable composure. “You know, it’s not like a surprise to me,” she said. “I expect good results like this. For me, I was like, okay, good. It’s a step in the right direction. I get to play in the final. You know, I still have another match, so it’s not a full celebration yet.”