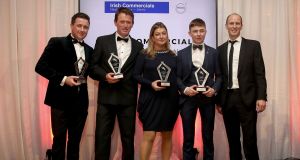 Kenny was the only one of three Irish riders in the 1.60m competition to progress to the six-strong jump-off where, again going clear, he stopped the clock on 36.69 with his own and Ann Thompson’s nine-year-old Colestus gelding Classic Dream. Simon Delestre, Kevin Staut and Roger-Yves Bost finished filled the top three spots with Hermes Ryan (35.34), For Joy van’t Zorgvliet (35.65) and Sangria du Coty (36.05) respectively.

On Saturday night, Kenny partnered SRB Stables’ Dabelle to finish fifth in the 1.50m speed class while on Friday he was a member of Team Europe who saw off the challenge of Team America to win the Riders Masters Cup.

As he was competing in Paris over the weekend, Kenny missed Saturday’s Irish Show Jumping Awards night in the Killashee House Hotel, Naas where he was crowned the Royal Dublin Society international rider of the year. The 31-year-old, who has maintained his position as No 8 in the world in the most recently-published FEI rankings, divides his time between the USA and The Netherlands. He has recorded 23 FEI victories this year on 11 individual horses.

The Connolly’s Red Mills international young rider of the year was Mikey Pender who, in June, at the age of 19, became the youngest winner of the famed Hickstead Derby in which he was making his debut on Hearton du Bois Halleeux. Winner of the Jack Dodd trophy for rookie of the year was Co Kilkenny’s Susan Fitzpatrick (20).