Next stop Tokyo after night of unbearable tension for Ireland

Goalkeeper McFerran the hero after dramatic penalty shootout against Canada 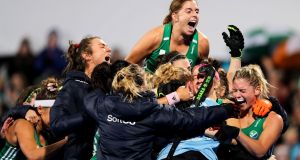 Of course it fell to a penalty shootout ending.

For the alien dropping in on hockey for the first time, over the last 12 months it would have seemed like a normal finish, that all high-stakes international matches had to end with a penalty shootout, that all World Cup games with Ireland involved had to come to a close with the entire Irish squad, a riot of green, sprinting down the pitch to swamp their goalkeeper Ayeisha McFerran.

It had been a summer of penalty shootouts in 2018 in London and also a winter of shootouts in 2019, which ended dreadfully for the men’s Irish team last week in Vancouver. But finally this women’s team were able to make their own history against Canada, falling 3-1 behind in the one on ones before Bethany Barr, Chloe Watkins, again, and Róisín Upton squeezed home three in a row while McFerran spun her goalkeeping magic to save three in a row for Ireland to win it 4-3. Breathe out.

On that Ireland claimed direct entry into next summer’s Olympic Games for the first time in their history and became the first Irish women’s field sport team to qualify for what is considered the most important competition in hockey.

“I haven’t been to a hockey match since my sister played,” said Taoiseach Leo Varadkar, who watched the match. “I am delighted the girls are going to Tokyo. ”

It almost seemed that the previous two days of hockey and the eight quarters of scoreless play had been a long spun out preliminary for what was destined to come next. A brief 15 minutes of intensity and swinging fortunes, Ireland coming back and Canada forming that desperate huddle of crushed hopes, the very one the Irish men’s team had formed last week.

In some sort of ghostly circularity of justice, the women’s comeback from 3-1 down was in reverse to the men, who had fallen from that red hot advantage of 3-1 up. And so the fortunes of the teams inverted, the men who qualified for Rio 2016 and now out of Tokyo 2020, the women cruelly falling to China in a shootout to miss Rio and emerging from those ashes for a hugely emotional win last night in Leinster’s old rugby ground in Energia Park in Donnybrook.

In an almost absurd turn around, the weather went from deluge on Saturday to a pitch so dry yesterday that four fire fighters, to the tune of ‘It’s raining men’ over the public address, were asked to pump water over the surface an hour before push back.

Then for most of the night in front of a reset record from Saturday of 6,137 fans and a collective biting of nails the game was dominated by both defences, especially on the pressure points.

The highlight was the final, effervescent charge, captain Katie Mullan listening close to the umpire for the result of another interminable referral and then that sea of green limbs hurtling towards their goalkeeper, who had settled by the corner of the pitch at the Wesley end.

“It’s a dream come true for me to play in an Olympic Games,” said Munster’s Róisín Upton. That times 17, for the entire squad.