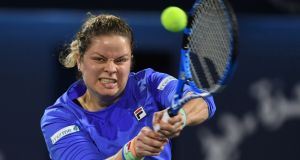 Comeback queen Kim Clijsters lost 6-2 7-6(6) to Spain’s Garbine Muguruza on her return to the professional circuit after nearly eight years in an engrossing contest in the first round of the Dubai Duty Free Tennis Championships on Monday.

The 36-year-old Belgian, who has won four Grand Slam singles titles but last played in 2012 at the US Open, could not cope with the Spaniard, who hit 19 winners while a rusty Clijsters finished with 10 double faults and 23 unforced errors.

The Belgian was broken in her first service game as nerves got the better of her but after falling 2-0 behind Clijsters showed the grit and tenacity of old to gain a foothold in the match and troubled the Spaniard on crucial points.

“It was a special match, she’s back and she’s an incredible player. I was happy to be the one to face her,” ninth seed Muguruza, who reached the Australian Open final earlier this month, said in a post-match interview.

“I think she is going to give [opponents] a hard time. She was very good and I was expecting it to be hard.”

Clijsters, known for her superior on-court movement and rallying during her heyday as world number one, opted to rely on baseline rallies and her powerful forehand to hit winners with clever shot placement that caught Muguruza off guard at times.

After being broken in her first service game, a dogged Clijsters fought back to keep the Spaniard at bay in the early stages with a few flashes of brilliance that had the crowd cheering every point she won.

On serve, Clijsters controlled points and even turned back the clock to pull off her trademark splits and return on the hard court a few times.

However, 26-year-old Muguruza was ruthless on serve and forced the four-times Grand slam champion into making numerous unforced errors when rallying from the baseline, sometimes with the open court at her mercy.

Fatigue was also a factor early in the second set as a lack of match fitness began to show for Clijsters on a warm evening in Dubai. Her double fault count continued to climb before she suddenly got a second wind.

An early double break for Muguruza looked to set the tone for the rest of the contest but a determined Clijsters fought back and broke her opponent twice to level at 4-4 while the Spaniard searched for answers to her commanding groundstrokes.

But Muguruza quickly recovered to take the set to a tiebreak and, despite Clijsters’ best efforts to take it to a deciding set, the Spaniard advanced on her second match point.

This is Clijsters second comeback. She first retired from tennis in 2007, taking a break to have the first of her three children, but returned within 24 months to claim three of her four Grand Slams and return to the top of the rankings in 2011.

1 Sonia O’Sullivan: Taming The Tan gave us one last roll of the dice before shutdown
2 Avoid the treadmill at all costs – marathon training in the 2km radius
3 Reality Bites – Tales from the new normal: Shane O’Donnell
4 Ireland’s underage rugby stars miss out on chances to shine at Easter
5 ‘NRL Island’ being considered in Australia to continue season
Real news has value SUBSCRIBE