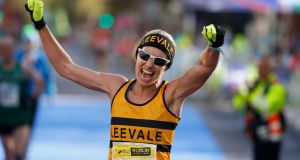 Not quite a home victory, but two hometown heroes nonetheless - first Mick Clohisey and then Lizzie Lee making their Irish presence felt at the very elite end of the 2018 Dublin Marathon.

Lee made it onto the women’s overall podium, finishing an outright third after a beautifully executed effort, her time of 2:35:03 the fastest by an Irish woman in Dublin since 2014. That also won the Cork athlete the Irish national title, in the city she calls her second home having lived here for eight years during the 2000s.

On a day sent straight from the Greek Gods at Marathon, Clohisey delivered an equally rewarding run when finishing sixth overall in the men’s race, his 2:15:58 the fastest time by an Irish man in Dublin in 19 years. For the Raheny runner that also brought special satisfaction given his coach is former three-time winner Dick Hooper, including the inaugural Dublin Marathon in 1980.

The 38th edition of the event attracted another sell-out - 20,000 runners and the perfect conditions no doubt spurred many others to the near perfect run: Asefa Bekele from Ethiopia improved on his two successive third place finishes to win the men’s race outright in 2:13:24, before Mesera Dubiso made it an Ethiopian double by winning the women’s race in 2:33:49 - both earning themselves a tidy €12,000 payday.

For Lee it certainly sounded like the perfect run - the 38-year-old mother of two battling for outright victory with Dubiso and another Ethiopian Motu Gedefa, who took second, only in no way disappointed with the podium position - her coach Donie Walsh at Leevale also a former winner of the Irish national marathon back in 1972.

Whatever about the agony and ecstasy which comes at the finish of every marathon, Lee didn’t need to hide her tears. She also won €6,000 for third woman, plus €3,500 as first Irish woman, her 2:35:03 the fastest by an Irish woman in Dublin since Maria McCambridge ran 2:34:19 for second in 2014.

“All happy tears”, she said. “I’m an Irish woman, and I heard a man shouting at me in Clonskeagh, around mile 19, that I was doing the Irish proud. I kept saying to myself I have to get on to the podium, I just have to get on to the podium. I really wasn’t happy with my run at the European Championships in Berlin in August, and said to Donie at the finish I really wanted to come to Dublin and win the national title. I needed redemption after Berlin, but the forecast here suited me, the cool day.

“And I had a dream race, I just couldn’t keep with the two Ethiopians when they picked it up in the last two miles. But to get an Irish woman on the overall podium, I’m pinching myself, thrilled with that.”

Indeed Lee ran her own pace; “I went through 10 miles, and the leaders were really close, and once I caught them I just sat in. I just went for it on the slipway off UCD, knew that from winning the mini marathon, and I just hammered to the next mile.

“I’m a mother of two small girls, I work full time, and running is my hobby. And I’m on the podium with two Ethiopian women. And for Donie, and Jim Aughney, the Dublin race director, who has been there from the beginning for me, the support he gives us. And Dick Hooper was out there as well passing me bottles at the water stations. And everything second step I was getting a shout for ‘Lizzie’ or for ‘Leevale’, and I know the other girls could hear that too.”

Both Lee and Clohisey ran the Olympic marathon in Rio two years ago, plus the European Championship marathon in Berlin just two months ago - the home crowd out around the 26.2 miles worth seconds if not minutes on the day.

With her husband Paul, Lee’s first daughter Lucy was born in late 2014, and she came back in late 2015 to run her fastest marathon (2:35:51 in Berlin), qualifying her for Rio (where she finished 57th); her second daughter Alison was born 16 months ago; she’s also a full-time employee of Apple and that hasn’t slowed her down either.

“And I felt amazing, coming down Fosters Avenue, and I lived in Dublin for eight years, so I knew every metre of those last few miles, and I just thought ‘let’s be having you.”

Clohisey, at 32, was very much on home ground, and having already won national titles on the track and cross country, the marathon title makes it a clean sweep.

“Yeah my first time to run Dublin,” said Clohisey, his 2:15:58 the fastest by an Irish man in Dublin since Gerry Healy in 1999. “My home town, so a different feeling coming into it, the home crowd and support all the way. For Dick Hooper as well, famous for this event, I know it will take a while to sink it. I’d put off Dublin the last few years with the major championships falling in August, this year I said I’d see how I’d recover after Berlin, and give it a crack. Great for my family out on the streets as well, and my wide, and I’ve a few relatives on the southside as well.

“I got stuck early on, before it picked up coming out of the Phoenix Park, and ended up on my own for a while. I had to take a pit stop at Terenure College around 17 minutes, which thankfully didn’t take too much out of me, but I got going again, and managed to reel in six or seven lads over the last six miles or so.

“The last few marathons I’ve done I might have gone out too fast. I think I got it okay this time, but you never get it exactly run. I was confident I’d have the strength in the end. I wasn’t worried about the splits.”

“Winning the national title means a lot to me,” added Clohisey, for years now one of the most loyal servants, “having won the track and cross country, and with such a history in Raheny too, it should be good going back over the northside later.”

Johnboy Smith from England won the wheelchair race with a gun-to-tape victory, his 1:36:12 denying Kildare’s Patrick Monohan a fifth successive Dublin title, as he came home second in 1:38:39, with Denmark’s Ebbe Blichfeldt third in 1:50:58.

The 2018 race marks the end of SSE airtricty sponsorship, with new sponsors already lined up and to be announced on Tuesday.