Roger Federer asked to explain what is going on with seeds five, six and seven falling 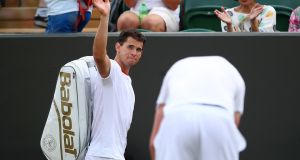 Dominic Thiem of Austria waves to the crowd as he leaves the court after loosing to Sam Querrey. Photograph: Getty Images

Alexander Zverev, Stefanos Tsitsipas and now French Open finalist for the last two years Dominic Thiem have lost first round. Surely Roger Federer could explain what is going on with seeds five, six and seven falling.

Federer won his first match against South African Lloyd Harris, but stuttered a little in the second set dropping it 1-6 then worked it out, winning 6-3, 1-6, 6-2, 6-2.

Rafa Nadal, a little moany this year because the seeding they use has him at three and in a tough side of the draw. French Open champion but third best for Wimbledon. Even allowing for the grass, which has been slowed down over the years, go figure.

Nadal dropped his first service game but won his opening match against Japan’s Yuichi Sugita 6-3, 6-1, 6-3. Neither former winner panicked. They adjusted and kept their heads. First day on grass in a Grand Slam is sneaky and crafty and patient.

It has been two or three years now that people have been talking about those three players as your successor Federer was told. Surely that’s strange?

“Yeah, surprising, of course,” said the 20 times major winner. “It’s not like they are unseeded. I think any seed that loses, any top 10 seed that loses in the first week, with 32 seeds, is on the more surprising side. I don’t care almost who the opponent is.”

That seemed to say shame on them. Thiem seeded fifth, probably could have drawn an easier first round opponent than American Sam Querry, who has played Wimbledon 12 times, although in the head to head the 25-year-old Austrian led 3-1.

But Querry was a semi-finalist at Wimbledon in 2017 and it’s his most successful Grand Slam while he also reached the final at Eastbourne last week. Master Federer was having none of it.

“For that many guys to lose early...you add Thiem to it today, yeah, it’s just too many,” he said. “Margins are slim. I don’t know how Rafa is doing, but he struggled early on today. I struggled early on. It can happen.

“This first week at Wimbledon really tests your different skill set and your nerves a little bit. Let’s be honest, maybe also especially Sascha (Zerev) and Dominic, it’s not their favourite surface. So it can happen. But it’s definitely surprising.”

Thiem had looks at Querry with six break point chances then Querry converted his first opportunity. The Austrian, having played seven matches in Paris also decided to conserve energy and arrived in London without preparation. So the Querry name made for a nightmare pairing.

“I was mentally prepared for this kind of game,” said Thiem. “Just broke down a little bit after he converted his first break chance, and that was it basically.”

Nick Kyrgios, who recently scorched the ears of Irish chair umpire Fergus Murphy with expletives, also came through his first round in five sets against compatriot Jordan Thompson. Kyrgios lost the fourth set 6-0 and won the fifth 6-1. That’s the way he rolls.