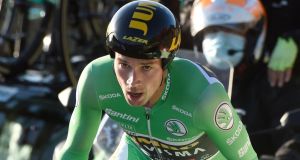 Slovenia’s Primoz Roglic in action during the stage 13 time-trial at the Vuelta a España. Photograph: Miguel Riopa/AFP via Getty Images

They call it the race of truth and there was no denying the end result, Dan Martin slipping almost a minute off a podium position after the individual time-trial once again shook up the leading quartet of this year’s Vuelta a España.

It’s certainly not over yet, with five stages and several more substantial climbs before the finish line in Madrid on Sunday, only there’s no denying either that Primoz Roglic is now primed to defend his title after taking his fourth stage win by a single second, regaining his overall lead after the 33.7km of solo riding from Muros and down along the coast of Galicia before the steep peak at Mirador de Ézaro.

Martin has started stage 13 just three seconds off Britain’s Hugh Carthy, who for the first time since the race began took over third place with Sunday’s stage win on the Angliru. By close of business at Mirador de Ézaro, Carthy’s lead on Martin was up to 55 seconds, the Irish rider still safe in fourth place, but in truth knowing something may need to go wrong with the trio ahead of him if he is to regain that podium spot.

For now Roglic leads second-placed Richard Carapaz by 39 seconds in the general classification, the Ecuadorian rider from Ineos Grenadiers again handing back his leader’s red jersey after just one day, surrendering 49 seconds in all to Roglic, despite riding well to take seventh overall on the stage.

Indeed the stage saw some changing of positions even within the 33.7km, most riders switching from time-trial bikes to regular road bikes just before the final climb, though there was no sign of the 31-year-old Roglic faltering this time.

Carthy of EF Pro Cycling, quickest of the leaders at the first check point, found himself ending up between those two, fourth overall on the stage (Roglic bettering the American William Barta by a single second), but tellingly with some substantial distance on Martin, who also came away with a fine ride to finish the stage 13th best, in truth the windy coastal conditions not to the liking of his extra light racing weight.

There’s no denying either that Martin’s effort was again absolute and complete: “Dan had a great time-trial,” said Oscar Guerrero, his directeur sportif at Israel Start-Up Nation. “We are very happy with his result. With his light body and with the wind conditions he has done well and I actually believe that in the climb, he was one of the best.

“We will now concentrate on moving up Dan up to third place in GC. We strongly believe it’s possible to achieve this in the remaining stages, plus getting another victory.”

Perhaps, only for Roglic, who surrendered his lead in the Tour de France on the penultimate time-trial to fellow Slovenian Tadej Pogacar (who also beat him in their national time-trial), all roads now lead to Madrid, where the Jumbo-Visma rider won his first Grand Tour last year. Even with no time bonuses this time for the top-three stage finishers, Roglic now has 39 seconds to spare on Carapaz, with Carthy still in third place, for now another eight seconds behind.

“I feel strong, surprisingly. I thought I would suffer a lot more, but I went quite fine and it was quite good. Everyone said you will take time – but we all start on the same time from zero. We all know it’s not really a fun thing to do a time-trial but today I had the legs and I could do a nice time-trial.”

Martin is still on course to better his highest placing in Grand Tour history, having finished seventh overall in 2014, and there is still one further big mountain stage to come where Martin can try his luck, next Saturday’s penultimate 178.2km stage from Sequero to La Covatilla featuring five intermediate climbs before finishing at the ski station.

Sam Bennett made it safely through the day, riding well to finish in 103rd, 6:26 behind the stage winner, and the Deceuninck-Quick-Step rider is now very much on course to challenge for that second outright stage win on the perfectly flat final run into Madrid on Sunday.