Dagestani boy who wrestled bears has no fear of Conor McGregor

In an area of vastly diverse ethnicities and a war-ravaged past, few have been able to unite the region of Dagestan as Khabib Nurmagomedov, who hails from the small village of Sildi, has. Video: David Dunne 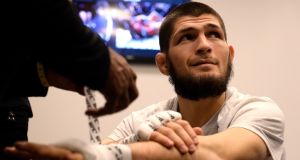 Khabib Nurmagomedov could well be Conor McGregor’s toughest opponent yet when they square off in Las Vegas for UFC 229. Photo: Mike Roach/Zuffa LLC via Getty Images

Barging his way into a boxing ring with Floyd Mayweather and pocketing $100m for his troubles was all very well for Conor McGregor. But what did it do for those fans only interested in the real excitement of seeing him wear four-ounce gloves? It was easy to recall that line from Marvin Hagler, about how tough it is to get out of bed to do roadwork at 5am when you’ve been sleeping in silk pyjamas. And easy to fret. But then they watched how the Irishman behaved over the coming months.

In Dublin he pushed referee Marc Goddard and slapped an official at a Bellator MMA event, a slice of megalomania that could have led to a judge peering at McGregor over his bifocals five months before it happened in New York. In New York he acted like a demented Milk Tray man. He flew across the ocean on a private jet, stormed the Barclays Arena and hurled a steel dolly through a bus window. And all because Khabib Nurmagomedov made Artem Lobov feel queasy in a hotel corridor. Mmm, snoozing in silk didn’t seem like such a bad thing after all.

In a week he returns to the octagon, unpunished by the UFC and let off by the law. And if proof were needed that one way to improve the prize in prizefighting is behave in a way that horrifies polite society, the lightweight title match-up with Nurmagomedov promises to be the biggest in MMA history. Dana White originally called the bus attack “the most disgusting thing that has ever happened in the history of the company” but now the UFC is returning to the scene of the crime and doing jigs and reels around the shattered glass. The mad king is returning and he will transform a wretched 2018 for the UFC. As Khabib might put it, “It’s a big drama show.”

But it’s quite a fight too. The men are chalk and cheese inside and outside the octagon and the respect that once existed between them has long ago melted away. Khabib’s plan is to make McGregor “humble”.

As the youngest son in his family, he still lives with his parents in Dagestan, along with his wife and two young children. He is devout and conservative, and the encroachment of Western culture in his homeland makes him suspicious. When a rap concert took place in his homeland, he wrote on social media. “Modern Dagestan. Is that what was bequeathed to us by our righteous predecessors?” The combination of his sporting prowess and religious devotion makes him a hero to millions of Muslims in Eurasia and he is mobbed when he makes public appearances.

A mountainous Russian republic that borders the Caspian Sea on one side and Chechnya on the other, Dagestan is in Russia but really not Russia as we know it, where 80 per cent of the people are Slavs and the city skylines are pretty with all those onion domes. Like much of the North Caucasus, the region has an overwhelmingly Muslim population and it has been scarred by ethnic strife since it came under Russian control in the early 19th century. Violence has escalated there since the Chechen wars of the 1990s and boys are brought up to know the meaning of confrontation. As Khabib’s father, Abdulmanap, told journalist Karim Zidan in 2015: “I believe every man must be ready for war… even in peaceful times. It is always a topic of discussion in the Caucasus.”

Wrestling is what boys in Dagestan do and the region produces more brilliant freestyle wrestlers than any other region in the world. At the Rio Olympics in 2016 Dagestani-origin wrestlers won five freestyle gold medals, many of them looking like reincarnations of Abraham Lincoln with their unusual facial hair.

Before he could walk, Khabib crawled on the yellow wrestling mats of his father’s gym, where young boys from the village came to nurture their Olympic dreams. As Zidan wrote in his wonderful profile of the UFC lightweight champion on bloodyelbow.com: “Three days after his ninth birthday, Khabib was led outside by his father and towards a chained bear cub. Well accustomed to Dagestani culture and patriarchy even at his young age, the boy knew better than to question his father’s wishes. Khabib tucked his chin and dove for the bear’s front paw.”

Years later, Abdulmanap said: “It was a test of character rather than exercise.”

There are good reasons why for many moons the narrative around this match-up was five words long: “No, Conor! Don’t do it!” After wrestling a bear as a nine-year-old, Khabib has made defeating world-class lightweights look like child’s play. He has a pristine 26-0 record; he has never even lost a round. He looks invincible. Making his opponents backpedal is like bullying them towards their own personal event horizon. Once their back is to the cage wire, he grabs hold of them, his single-leg or bodylock habitually spelling doom. Dragged, tripped or thrown, down they go.

And on the canvas he is so smothering and violent that he sometimes carries on conversations with people on the safe side of the cage. “Be careful,” he warned Dana White, as he subjected Michael Johnson to ferocious ground and pound at UFC 205. “I’m gonna smash your boy.” Meaning McGregor of course.

McGregor supporters are fretting he will be mauled in a way that tarnishes his sporting legacy. Which in a strange way will please him. Outside doubt motivates McGregor, and when you are already a brilliant exponent of what you do it is only by being addicted to danger and oblivious to risk that you can create that magic elixir. And so we have McGregor the global superstar who takes short-notice fights, competes two weight classes above his division, enters the boxing ring with Mayweather and now returns to MMA to take on the bogeyman. All the while, with his wild words, making millions of escapists believe there is a revolution at hand.

McGregor at work is a thrilling sight and it is easy to visualise him winning. It is the classic striker-versus-grappler match-up, almost a throwback to early UFC days when fighters with wildly divergent skills would compete and everybody would get a chance to see which form of combat was the most effective.

An opening advantage goes to McGregor with the fight starting on the feet. Both men are pressure fighters, comfortable when their rivals are retreating, and so who can best impose their pressure game is perhaps the contest’s key battle. Here McGregor excels. Khabib’s way of pushing his opponents back is effective, because the threat of the takedown in so pervasive. But it is inefficient. As he plods forward, he can resemble a windmill on a blustery day. Against Nate Diaz first time out, a fast-working McGregor swung for the fences and wore himself out. By the time he fought Eddie Alvarez eight months later, he was surgical, light on his toes, sniping with lethal speed and accuracy. It was an evolution in style that training for Mayweather surely refined.

And so the main question of the fight is how Khabib gets his hands on a fresh McGregor without getting pieced up and knocked out. John Kavanagh has predicted he will shoot from the locker room. But probably having a granite chin like Diaz would help most. Survive that left hand and all the variables of the contest come rushing in. And that would be bad news for the Irishman.