Conor McGregor v Khabib Nurmagomedov: When is it? What time is it at? What TV channel is it on? 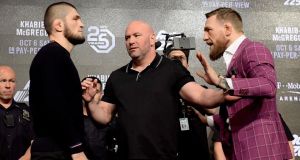 Divisive, brash, confident, insufferable, alluring, nauseating and pretty handy with his left - Conor McGregor is back in the octagon.

Love him or hate him, there are few figures in Irish sport who attract attention quite like the 30-year-old from Crumlin.

And now, after a two-year hiatus and with his own whiskey to flog, McGregor returns to action against Russia’s Khabib Nurmagomedov.

Without McGregor, mixed martial arts remains a sport in the shadows - unable to grab the headlines like the sweet science of boxing.

With McGregor, it can be consuming and everyone - from your Nan to your postman - will have an opinion on it.

And so, as the circus starts to roll into town and the seats begin to fill up on the bandwagon, here is everything you need to know ahead of UFC 229.

UFC 229 is the latest instalment of Dana White’s MMA masterpiece. McGregor will take on current lightweight champion Nurmagomedov at the top of the bill, as he bids to regain the 155lbs belt he was stripped of in April due to inactivity.

The event takes place on Saturday October 7th. But, with the main card not starting until 3.0am Irish time it will be Sunday morning for those who opt for bed and an early alarm call - rather than deciding to power through after a night on the tiles.

The T-Mobile Arena, Las Vegas. Where else?

The fight is being broadcast on BT Sport, who retain rights to the UFC until the end of the year when Eleven Sports take over. If you have Eir broadband you may also have access to BT Sport.

Who is McGregor fighting?

According to McGregor himself, he’s up against “a little rat, a little weasel,” and a former “fanboy.” Not that you’d know it from the pre-fight press conference on September 21st, but relations between both fighters used to be fairly cordial, with the two sharing friendly tweets in 2014 and posing for a picture after McGregor won at UFC 178. But now, with the two set to knock lumps out of each other in Nevada, there’s little room for pleasantries - naturally.

The unbeaten Nurmagomedov - 26 and 0 - is the current holder of the UFC lightweight belt. He won the vacant lightweight championship title in April after a points win over America’s Al Iaquinta at UFC 223 - this will be his first defence. Rated eighth in the current UFC pound-for-pound rankings, Nurmagomedov hails from the Republic of Dagestan, and is renowned for his wrestling ability.

When was McGregor’s last fight?

He was last seen in the Octagon on November 12th 2016, as he defeated Eddie Alvarez by TKO in the second-round at UFC 205. Technically, that wasn’t his last fight - but we’ll get to that later.

What’s he been up to since?

Where to start? With UFC arguably yet to become a truly popular sport with the general public, an inactive McGregor has another fight on his hands - trying to stay relevant and keep himself in the public eye. This is, in fairness, something he’s managed to do with aplomb.

During his two-year absence McGregor has become a father, been stripped of his UFC belts, shared a boxing ring with Floyd Mayweather Jr, thrown a metal trolly at a bus and released his own Irish whiskey - Proper 12.

He’s been a busy boy.

Boy did he. You have to marvel at McGregor’s pure chutzpah and marketing ability, which saw him engineer a boxing match in Las Vegas against one of the sport’s pound-for-pound greats, pocketing a cool $30 million for his troubles (Mayweather took home $100m). Having repeatedly called out Mayweather, McGregor was finally able to coax him out of retirement and the two entered the ring on August 26th 2017 to take part in the world’s most lucrative freakshow.

Naturally, Mayweather won the fight with ease - extending his professional record to 50-0-0 before heading back into retirement an even richer man. While comfortably beaten McGregor proved his magnetism and pulling power, with the fight breaking box office and financial records on both sides of the pond. As for the punters? Well, we were left feeling a bit dirty.

What about the bus?

Much of the bad blood ahead of this fight stems from an incident in Brooklyn, New York, on April 5th this year. A few days earlier, Nurmagomedov was involved in an altercation with Artem Lobov - one of McGregor’s mates - ahead of UFC 223. In response, McGregor - sat at home in Dublin - ordered for the private jet to be fired up and flew to America for some retaliation. Mobbed up, McGregor entered the Barclays Centre in New York and confronted Khabib, who was sat on a bus waiting to leave the arena. With the Russian not willing to step off the bus, McGregor attacked it, launching a trolly at the windows and injuring Ray Borg and Michael Chiesa - UFC fighters also on board.

The attack was, according to UFC president Dana White, “the most disgusting thing that happened in the history of the company.” A warrant was put out for McGregor’s arrest and he was charged with three counts of assault and one count of criminal mischief. McGregor pleaded guilty to a count of disorderly content, and was handed five days community service. He was also the recipient of a number of civil law cases which are yet to be decided.

Ultimately, though, the incident only served to stoke the fires ahead of October’s showdown. All part of the game.

A reminder - if it was needed - that the modern McGregor is a brand as well as a fighter. Named after the postal code of his native Crumlin, Proper 12 is a nod to McGregor’s neighbourhood, where he “learned the values of loyalty and hard work.” A potentially lucrative nod, at that.

Who else is on the card?

The full line-up for UFC 229 is as follows (in chronological order):

McGregor heads into his comeback fight as the underdog with the bookies - his two-year absence outweighing his reputation pricewise.

I’m enjoying this bottle of Proper 12, while watching a proper Irish hero give a proper beating to this proper Russian weasel.

It’s not quite boxing, is it?