Cycling: McCurley back in action for Ireland at European track event 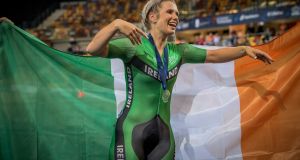 Shannon McCurley celebrates after winning a silver medal in the scratch race at the European track championships in Apeldoorn.

Following on from her silver medal in the women’s scratch race on Wednesday, Shannon McCurley was back in action for Ireland at the European track championships on Thursday evening.

She competed in the women’s elimination race and finished 10th, with the gold medal going to the Netherland’s Kirsten Wild. Emily Nelson, the British rider who outsprinted McCurley to win Wednesday’s scratch race, was second.

Although McCurley will have hoped to have been closer to the medals on Thursday, she will take great encouragement from her runner-up slot in the earlier event. She has raced for Ireland for several years and is enjoying greater success after switching to endurance events after previously specialising in shorter-distance races.

Also in action on Thursday was Felix English. He competed in the 15km scratch race and placed 11th. Spain’s Sebastian Mora Vedri won ahead of Greece’s Christos Volikakis and Wim Stroetinga of the Netherlands.

English will try again for a medal in the four-race Omnium on Friday; Lydia Boylan will compete in the women’s version.

Meanwhile, Ryan Mullen (Trek-Segafredo) will continue his comeback after a knee injury when he begins stage two of the Tour of Guangxi in China in the jersey of King of the Mountains leader. The 25-year-old finished in the main bunch on Wednesday’s opening stage but, thanks to his presence in an earlier three-man breakaway group, collected points that put him into the leadership of the King of the Mountains competition. He also ended the day sixth overall courtesy of time bonuses in intermediate sprints.

Mullen has extended his contract with the Trek-Segafredo squad and is hoping for an injury-free year in 2020. However his chances of a debut in the Tour de France took a blow after next year’s route was unveiled in Paris on Wednesday.

Mullen is a time trial specialist but the Tour will have just one race against the clock, namely stage 20’s 36km race to La Plance des Belles Filles. This finishes on a tough 6km climb, ruling him out of the running. But fellow Irish men Dan Martin and Eddie Dunbar will be much happier with that course and also the route in general. It features a considerable amount of climbing, something which plays to their strengths.

Sam Bennett will also hope to be in the race, although that could depend on him being able to split with his current Bora-hansgrohe team in favour of Deceuninck QuickStep. The two are part of a tug of war over Bennett, who wants to go to the latter squad but is being constrained from doing so by a reported preliminary agreement to extend with Bora.

The Irish Times understands that this tussle is continuing, but that Bennett and his agent hope for a resolution soon.

1 Eamon O’Shea: ‘We spent quite a bit of time talking about older people rather than to older people’
2 Matt Williams: Six Nations must recognise the desire for revolution outside Europe
3 Monica Seles: The warrior queen who could have been the best ever
4 Sport crosses its fingers yet again as ministerial merry-go-round gets another spin
5 Aidan O’Brien targets historic eighth Epsom Derby win with strong hand
Real news has value SUBSCRIBE