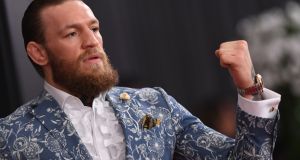 Conor McGregor is set to end his latest retirement with a fight against Dustin Poirier in January. Photograph: Valerie Macon/AFP via Getty Images

Not for the first time, Conor McGregor has decided his UFC career is not over after all and will return to the octagon to face Dustin Poirier on January23rd.

The 32-year-old Dubliner had announced his retirement from mixed martial arts in June, something he had also done in 2016 and 2019, but had talked about a fight with Poirier in recent months. McGregor has fought for a total of 40 seconds in 2020 after a swift TKO victory over Donald Cerrone in a welterweight contest at UFC 246.

According to McGregor’s official website, the fight will take place at 155lbs, most likely in Abu Dhabi. The two last fought each other in 2014, when McGregor won by TKO in the first round.

“I am very grateful to be about to return and get to do what I love again,” McGregor said earlier this month about a possible fight between the two. “I look forward to the fresh test Dustin will bring since our first bout, while also showcasing my own incredibly deep cache of weaponry. Whatever tool is needed on the night will be pulled from the duffel.”

McGregor is the biggest draw in UFC history, thanks to his flamboyant personality and exciting fighting style. His rival Khabib Nurmagomedov announced his retirement from UFC last month two years after the pair’s title fight had ended in ugly scenes with members of their entourages brawling in the arena. – Guardian