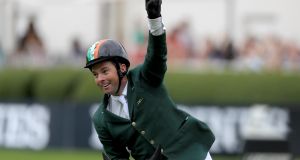 A second clear round from Cian O’Connor on Seringat sealed victory for Ireland in Friday’s FEI Nations’ Cup in Ocala, Florida.

The team of Cork native Shane Sweetnam, Tipperary’s Kevin Babington, Kilkenny-born Richie Moloney and anchorman O’Connor were in the lead after round one on four faults with the hosts and Mexico sharing second spot on eight.

Riding Spy Coast Farm’s 11-year-old Chacco-Blue stallion Chaqui Z, Sweetman had gone clear in the first round but picked up four faults at the water in the second while Babington’s mount, Shorapur LLC’s 12-year-old Stakkato Gold mare Shorapur, lowered a single pole in both rounds.

Disappointingly for Moloney, who posted the discard score in round one with Equinimity LLC’s Carrabis Z, the 14-year-old Canabis Z stallion picked up another 12 faults on his second appearance in the ring, putting pressure on O’Connor as the Americans were on a total of 16 following a second clear by their last-to-go rider, Beezie Madden with Breitling LS.

One fence down would have resulted in a jump-off while eight faults would have handed victory to the home team.

However, Seringat never looked like touching a pole and sent on down to the final fence by O’Connor, Ronnocco Jump Ltd’s 11-year-old Chef Rouge gelding stood well off this Longines oxer and cleared it in style to give Ireland a third victory in the competition.

While the other three team riders are living in the USA, Meath-based O’Connor is in Florida just for the season. “I think this was my 111th Nations Cup!” said the 37-year-old. “Sometimes winning becomes a habit, and in Ireland we need to get back into that habit. Nations’ Cups are the best because they teach riders to work together, and we need to do that to get back to where we belong.”

As Horse Sport Ireland has still to appoint a senior team manager, the role as chef d’equipe in Ocala was filled by Michael Blake, designated rider representative with the governing body.

“We were well prepared and I think what stood to us was that our team was selected in good time. I am a big believer in selecting your team early, being organised and then hope it works out,” said the Clare man who has had a lot of success with teams at underage level.

“The boys jumped great, Cian was under pressure at the end after Beezie Madden jumped clear. It was a strange competition in that the water jumped great in the first round but in the second, four or five horses in-a-row were in it, including Shane’s horse which we couldn’t believe because he is such a good water jumper. The last line was very difficult, with a flat triple bar to a long five strides to a vertical, vertical, oxer combination and it was very hard to meet that first vertical where you wanted.

“I couldn’t be happier with all four guys, it was a team effort and they were a pleasure to work with. We had a game plan and we stuck to it. We are really delighted with the win. It was very competitive in that the American’s had their strongest team out as they were chasing points. This gives us good confidence going forward,” Blake concluded.

Ocala was the second Nations’ Cup of the 2017 season, with a young Irish team finishing sixth in the opening round at Al Ain in the United Arab Emirates on Thursday. Neither competition was a point-scoring event for Team Ireland who will begin their European Division 1 Nations’ Cup campaign at La Baule, France in May.

In Friday evening’s FEI Grand Prix at the same venue, where only four combinations progressed to the jump-off, Paul O’Shea on Skara Glen’s Machu Picchu (37.599) was narrowly beaten into second by Brazil’s Pedro Muylaert on Prince Royal Z MFS (37.279). The pair recorded the only double clears.

Commenting on his mount, a 10-year-old Dutch Warmblood gelding by Silverstone which he has been riding since the backend of 2014, Limerick-born O’Shea stated: “When he was seven he won three Grand Prixs with his previous rider, and when he was eight he won a 1.50m in Dublin, so he has always been pretty consistent and very successful.

“He hasn’t knocked a fence yet this year so I am really happy with him. I tried to go fast tonight, but I wasn’t fast enough. I could have been quicker to the second fence, but other than that I think I did what I could do.”

1 Gerry Thornley: Saracens very late to apologise for repeated cheating
2 How to get to the Champions Cup final without breaking the bank
3 Does Ireland need to get in-line with UK’s stricter gambling laws?
4 Felix Jones expects De Allende and Snyman to boost Munster
5 Pep Guardiola says it’s time to axe the League Cup
Real news has value SUBSCRIBE