‘It’s only taken me close to 13 years but each run has a different story, a different memory’ 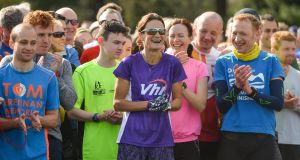 Sonia O’Sullivan in Cabinteely ahead of her 100th parkrun. Photograph: Sportsfile

There aren’t many milestones left in the running career of Sonia O’Sullivan, and yet even after all these years finishing her 100th parkrun seemed to rank pretty highly.

At least judging by that perfect facial mix of joy and satisfaction as she crossed the finish line at Cabinteely Park in south Dublin on Saturday morning.

The parkrun is absolutely not about the winning and all about the taking part, as anyone who has finished one will know. And they are many: from modest beginnings in 2004, when the first 5km run in London’s Bushy Park attracted 13 runners, the parkrun has now grown into a global mass participation phenomenon.

By now there have been 214,195 registered parkrun events in 17 countries, with some 2.9 million runners, and over 35 million ‘runs’ in total. Ireland is chief among them. The first event here took place in Malahide in November 2012, and there are now 76 registered locations - from Bere Island to Vicarstown.

“It’s a beautiful park,” she O’Sullivan, which is what most people visiting Cabinteely Park for the first time were thinking. O’Sullivan finished her first parkrun back in 2005, also in Bushy Park, and it’s taken her 13 years to get to the century mark, still a long way from out.

“A lovely lap too, but definitely a little on the hilly side. Especially as we had to do it three times. But it’s great to see so many people showing up this morning, and at all the other parkruns around the country, making the most of their Saturday morning, which is really what the parkrun is all about.”

Indeed the Cabinteely parkrun typically draws about 100 runners each Saturday morning: this one swelled to about five times that amount, helped perhaps by the bright, cool sunshine, and also by the chance to run with and possibly even beat the greatest Irish athlete of all time.

Given it’s not a race there is no winner - although Kevin Keane put his triathlon background to good use and was the “quickest”, albeit too modest to admit his time. O’Sullivan wasn’t far behind, crossing the line without even a cursory glance at her stop watch.

No prizes either - although that wasn’t strictly true here: O’Sullivan did receive a 100th-finish t-shirt, and a very special presentation from the students of Loreto Secondary School in Bray, a paperweight engraved with a congratulatory note. Most of the students, from first to sixth year, had run themselves, all at their own pace, patiently “coached” by their teacher and former Irish international distance runner Maria Lynch.

O’Sullivan has divided most of her 100 parkruns between Ireland and Australia, and is already planning number 101 next Saturday morning: it’s easy to keep track as all individual runs and times are recorded by a personal race barcode.

“It’s only taken me close to 13 years but each run has a different story, a different memory, meeting so many interesting people along the way.”

Another part of the attraction is all entries are completely free. All events also start at exactly the same time (9.30am on a Saturday morning) all-year round, and all the finishing times can be compared against each other.

Completing a 100th parkrun may be quite modest when set against the global numbers, including the combined distance of around 166,873,571km, but it takes quite a bit of dedication nonetheless, especially given how easy it is to wake up on a Saturday morning with an excuse not to run. Everyone in Cabinteely Park this morning was glad they didn’t have one.

1 Munster beat Glasgow to keep their winning streak going
2 The Offload: Ireland are stuck in no man’s land
3 Ireland’s loss set up by shambolic lineout and England’s supreme backrow
4 Solskjaer says United must be fully focused to avenge Istanbul defeat
5 Crowds of 4,000 to return to sporting events in England from next week
Real news has value SUBSCRIBE