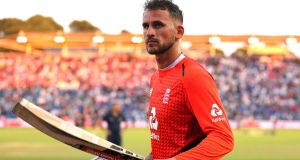 Alex Hales will not feature in the Cricket World Cup after being dropped by England. Photograph: Mark Kerton/PA

Alex Hales’ management company has said it is “hugely disappointed” at the cricketer’s treatment following the England and Wales Cricket Board’s decision to withdraw him from its provisional World Cup squad, describing the player as “devastated”.

The 30-year-old had been included in England’s 15-man preliminary World Cup squad but on Friday the Guardian revealed that he had been sanctioned under the ECB’s disciplinary policy for a second time and is serving a 21-day ban from cricket for recreational drug use.

While Hales is understood to have attended a pre-World Cup training camp over the weekend, the ECB announced in a statement earlier on Monday that he had been “withdrawn from all England squads ahead of the international season.”

As such, the Nottinghamshire batsman has been stood down from this Friday’s one-off Twenty20 against Ireland in Malahide, the upcoming limited-overs series against Pakistan and the World Cup.

Ashley Giles, ECB managing director of England Cricket, said: “We have thought long and hard about this decision. We have worked hard to create the right environment around the England team and need to consider what is in the best interests of the team, to ensure they are free from any distractions and able to focus on being successful on the pitch.

“I want to make it clear this is not the end of Alex’s career as an England player. The ECB and the Professional Cricketers’ Association will continue to aid Alex and work alongside his county club Nottinghamshire to give him the support he needs, to help him fulfil his potential as a professional cricketer.”

But Hales’s management team has hit back at the ECB over the decision, insisting that the player was assured by senior members of the governing body that under its own guidelines his World Cup place would not be in jeopardy.

“Nobody is seeking to excuse Alex’s behaviour in this instance,” the statement continued. “He absolutely acknowledges and recognises he made a huge mistake.

“The ECB insisted on Alex taking certain rehabilitation measures following his suspension … at every stage, Alex fulfilled his obligations and both he and his representatives were given assurances that any suspension - again under the ECB’s guidelines - could not affect his selection for the World Cup.

“It is unfortunate that a confidential matter made it to the public arena but, even before the publication of the story, Alex had again spoken to key members of the England organisation to express his regret and contrition. At that time, he again took away the message his World Cup place would be judged on playing merit.

“The fact all those assurances seem to have been rendered meaningless has understandably left Alex devastated.

“Until the matter became public, the ECB had fully observed their own process and guidelines and given Alex the support and guidance laid out in those regulations. It is now disappointing to learn these guidelines seem to have been disregarded while, in this instance, player welfare would also appear to be low on their list of priorities.”

Hales’ latest misdemeanour came only a few months after he was suspended and fined by the ECB for his part in the notorious street brawl in Bristol also involving Ben Stokes in September 2017.

The incident in Bristol led to Hales losing his place in England’s first-choice ODI team. Jonny Bairstow and Jason Roy have been the preferred opening pairing in the last 18 months though Hales, with 2,419 ODI runs at 37.79 and six centuries, was thought of by many as an enviable back-up option. The ECB will name his replacement “in due course”.

Hales’s management team added: “While Alex is hurt, the ECB’s decision does not dilute his commitment to the game and he will continue to give everything to Nottinghamshire’s cause. He would also like to wish England team-mates well for the World Cup.” – Guardian