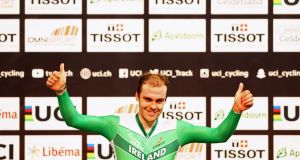 Mark Downey has transferred his track form to the road with some style, ending Thursday’s second stage of the Volta ao Alentejo in Portugal as the new race leader. Riding for his Team Wiggins squad, Downey gave advance notice of his good condition when he placed fourth in Sunday’s Classica da Arrabida – Cyclin’Portugal race.

He was then third on Wednesday’s opening stage of the Volta ao Alentejo, crossing the line one second behind his team-mate Gabriel Cullaigh. The Briton started the undulating second stage intent on holding his race lead, but finished 11th, four seconds behind the stage winner Dmitry Strakhov (Lokosphinx).

Any team disappointment was assuaged by Downey’s second place on the stage; he was part of a three-man breakaway move which reached the line two seconds ahead of the next two riders, and four seconds clear of the bunch. He takes over at the top, and is now level on time with the rider who was third on Thursday, the Spaniard Oscar Hernandez of the Aviludo-Louletano squad.

Meanwhile, Ryan Mullen’s strong riding thus far for his new Trek-Segafredo team will see him line out in Saturday’s prestigious Milan-Sanremo Classic. The Irish road race and time trial champion grabbed an early victory this year when he won the time trial stage of the Vuelta a San Juan in January, and has continued to impress with his new squad.

The team had hoped to back 2015 winner John Degenkolb in the race, but the German has been forced to scratch from the race due to illness. Although the course does not suit Mullen’s attributes, it is possible he will be instructed to try to get into the early break to give his team representation out front. He is building up for what he hopes will be a start in this year’s Giro d’Italia, where he will target the opening prologue.

Finally, four Irish riders are set to compete in another WorldTour race in the coming days, with Dan Martin, Nicolas Roche, Philip Deignan and Sam Bennett all down to ride the Volta a Catalunya. The race begins on Monday and runs until the following Saturday.

Roche will be backing team-mate Tejay van Garderen in the event. He has been given leadership of the BMC Racing Team, while Deignan will likely have to assist Sky team-mate Sergio Henao. Bennett will be hoping to aim for a stage win, while Martin will target the overall classification.

The latter two both withdrew from Paris-Nice due to illness, but have had time to recover and will be motivated to shine in the Catalan event.