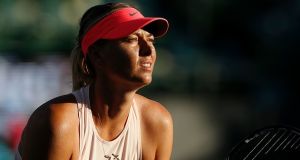 Maria Sharapova has been handed a wild card for the US Open. Photograph: Lachlan Cunningham/Getty

The United States Tennis Association has awarded Maria Sharapova a wild card to enter the main draw of this year’s US Open, which will be her first Grand Slam tournament since serving a 15-month suspension for doping.

Sharapova returned to the WTA Tour after her ban expired in April, but she was not offered a wild-card spot by French Open officials and missed Wimbledon after pulling out of its qualifying tournament with an injury. Sharapova was suspended last year after testing positive for the heart medication meldonium at the 2016 Australian Open, the first tournament she played after the drug had been banned.

Because she returned to the tour this year without a ranking, and has only been able to raise her ranking to 148th because of injury struggles, she has been at the mercy of tournaments to award her wild cards in order to play. USTA officials said her status as a past champion — Sharapova won the US Open in 2006 — helped make her case to play this year.

“Her suspension under the terms of the tennis anti-doping program was completed and therefore was not one of the factors weighed in our wild card selection process,” the USTA said in a statement. “Consistent with past practice, a wild card was provided to a past US Champion who needed the wild card for entry into the main draw.”

The USTA cited previous champions who had received main-draw wild cards at the tournament when they would not have qualified otherwise, including Martina Hingis, Lleyton Hewitt, Kim Clijsters and Juan Martín del Potro, the last of whom received one last year.

“Additionally, Sharapova has volunteered to speak to young tennis players at the USTA National Campus about the importance of the tennis anti-doping program and the personal responsibility each player has to comply with the program’s requirements,” the USTA added.

Sharapova has played the US Open only once since 2012, having missed the 2013 and 2015 tournaments with injuries, and last year’s event because of her suspension.

Thank you, @usopen. This is so so special. #goosebumps https://t.co/MnolaaqKsN

The US Open wild card is the 10th Sharapova has been awarded this year. She earlier received them to gain entry into the first four tournaments she played this year (in Stuttgart, Madrid, Rome and Stanford, Calif.). She also got wild cards into several tournaments she was forced to miss because of injury (Birmingham, England; Toronto and Cincinnati) and for two events she plans to play in China this fall.

Despite those invitations, the US Open’s decision to invite Sharapova differed from the French Tennis Federation’s ruling in May. Sharapova was denied a wild card into both the main draw and the qualifying draw of the French Open, with its president, Bernard Giudicelli, delivering the decision in a monologue on Facebook Live.

That decision was criticized by Steve Simon, the chief executive of the Women’s Tennis Association, who said he believed the decision was extrajudicial since it came after the end of the lengthy ban Sharapova had served. “What they’ve done, in essence, is increase her penalty,” Simon said.

The next Grand Slam event, Wimbledon, did not render a verdict. Sharapova expressed her intention to compete in the qualifying draw, which her ranking allowed her to enter, but then she withdrew from the entire grass court season citing a left thigh injury she sustained in Rome. She returned to competition two weeks ago at Stanford, but pulled out before her second match with a left forearm injury.

That injury also forced her out of the Rogers Cup tournament in Toronto as well as this week’s Western and Southern Open near Cincinnati. Sharapova traveled to Ohio but did not practice, and ultimately she pulled out citing her arm injury “as a precaution for the US Open”

Unlike the French Open, for which her ranking was insufficient to gain entry, Sharapova would have been eligible to compete in the qualifying draw of the US Open had organizers declined to give her a wild card into the main field.

“I’m very fortunate and grateful for the tournaments that have provided me a wild card, and I’d say 99 percent of them have at this point,” Sharapova said two weeks ago in Stanford. “So I’m very thankful. A lot of these events I’ve played at before, and I have a history with the people, the fans, the tournament itself. So the opportunities that I have, I’m taking it. I want to perform, and I want to perform well, and it means a lot to me to be there.”

The USTA has less discretion with its wild cards than other Grand Slam federations. Five of the eight available are predetermined: two go to Tennis Australia and the French Tennis Federation in a reciprocal swap; another is allotted for the NCAA singles champion if it is an American; a fourth goes to the winner of the 18-and-under junior national championship; and the fifth goes to the player who has accumulated the most ranking points in a set of tournaments over the summer, called the US Open Wild Card Challenge.

The Australian federation has not yet nominated its wild card choice, but the other four were given to Amandine Hesse, Brienne Minor, Ashley Kratzer and Sofia Kenin.

And in addition to Sharapova’s, the other two discretionary women’s wild cards were awarded to the Americans Kayla Day and Taylor Townsend.

1 Shock at golf clubs as sport faces shutdown in Level 5
2 Andrew Porter fronting up to responsibility of starting Ireland role
3 Fresh faces and renewed appetite: Is this a new era for Irish rugby?
4 Andy Farrell reshuffles his hand for rescheduled Italy game
5 Colin Byrne: Hard to understand how golf has become the bogey man now
Real news has value SUBSCRIBE

Andrew Porter fronting up to responsibility of starting Ireland role 06:00
Jackie Tyrrell: Winter is here and a machine-gun Championship awaits 06:00
Fresh faces and renewed appetite: Is this a new era for Irish rugby? 06:00
Chris Crummey thankful for the chance to embrace championship action 06:00
Colin Byrne: Hard to understand how golf has become the bogey man now 06:00
Here is your handy guide to sport on television this week