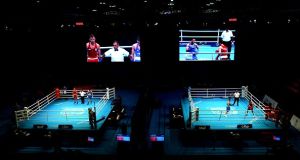 There is growing concern over the health of athletes after the revelation that boxers from two countries Turkey and Croatia contracted the Covid-19 virus while taking part in the Olympic qualifying tournament in London’s Copper Box Arena earlier this month.

As a result the AIBA interim president Dr Mohamed Moustahsane has asked for the boxing federation’s medical commission to conduct an investigation into the initial staging and subsequent postponement of the competition and what other countries have been affected by the virus.

“I feel sorrow for boxers and coaches from Turkey and Croatia who were tested positive for coronavirus after the Olympic qualifiers in London,” said Dr Moustahsane in a newsletter sent out on Friday.

“I hope they can get well soon with no complications to continue their career. I’ve asked the medical commission to investigate if there are more cases from London.”

Ireland sent a team of 13 boxers to the competition, which was suspended after three days because of growing health concerns. As of Thursday no Irish boxers had shown symptoms of ill health.

The Olympic qualifying tournament featured around 350 fighters from 40 countries.