Australian Open: Federer cruises into last-16 with no thoughts of retirement

‘For the time being, it’s all good. Lights are on green.’ the 37-year-old Swiss player said 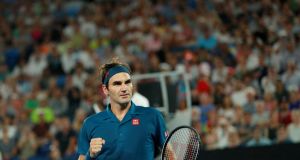 Roger Federer at 37 shows no signs of sending his fans into mourning by even thinking about retiring from tennis, and said after his 100th match on Rod Laver Arena, “For the time being, it’s all good. Lights are on green.”

The six-time and defending champion is chasing a hat-trick at the Australian Open, confirming his form and fitness with a comfortable straight sets win on Friday over the 21-year-old American, Taylor Fritz (who was making his debut on the tournament’s showcase court), to advance to the fourth round of a slam for the 64th time.

“I’m injury-free, enjoying myself,” Federer said after dismissing Fritz in under an hour-and-a-half, 6-2, 7-5, 6-2. “The kids [two sets of twins] are having a great time too on the tour. My wife’s happy. So, for the moment, there are absolutely no complaints and no plans. I’m just happy where I am in my life, in my career right now.”

Fritz, a former US boys champion, is ranked 50 in the world and took two sets off Alexander Zverev at Wimbledon last year, but he floundered against Federer. The Swiss remains on another level and, although stretched by Dan Evans on Wednesday, he looks up for the challenge from any of the young contenders who are increasingly making their presence felt.

On Sunday, he will test himself against one of the best of the rising prospects, Stefanos Tsitsipas, who had to fight hard to get past the 19th seed, Nikoloz Basilashvili, in five sets. Tsitsipas – whose 21st birthday in August arrives four days after Federer’s 38th – had earlier joked he would be thrilled to play him next, but hoped it would be Fritz.

“If I had known that Roger was 2-0 up when I said that,” he confessed later, “I probably wouldn’t have said it.

“I learned a lot since my last match with him. I know the patterns that he’s using a bit better now. He’s serving really well, so I’m going to have to utilise his, and take advantage of my returns as much as possible. I’m pretty sure he’s going to be serving well, so the return games need to be aggressive and pressing a lot.

“He’s a legend of our sport. It will be a great day facing him in one of the best arenas, Rod Laver. I’m really excited for that match.”

Responding to the suggestion that Federer regarded him as a quiet type, Tsitsipas said: “I do all my talking in the court. Actually, I was shy when I was a kid but not anymore. I think I’m comfortable meeting new people and having a discussion with someone. But not many of the players want to be friends on the tour. That’s a problem, that’s an issue – unless you speak the same language. That’s why you see all these Spaniards, Latin Americans, hang out with each other. Then you have Asian people with each other. So that makes sense.”

There will be no contempt when he and Federer become more familiar – almost certainly on Laver again – but plenty of mutual respect.

“I’m happy I played against him at the Hopman Cup,” Federer said of a match in which he needed two tie-breaks to win and take Switzerland through to the final. “He played really well there. I actually did too. It was really high-quality tennis. This is obviously a different type of match, it being best of five, and the fourth round of a slam.

“I like how he mixes up his game and also comes to the net. So will I. I think we will see some athletic, attacking tennis being played.”

A resurgent Tomas Berdych is also through to the last 16 after a 5-7 6-3 7-5 6-4 victory over 18th seed Diego Schwartzman. Berdych missed the second half of last season with a back injury but has a strong record in Melbourne having reached at least the quarter-finals in seven of the last eight seasons.

Grigor Dimitrov continued to take advantage of his favourable draw, beating Italian Thomas Fabbiano 7-6 (5) 6-4 6-4 to set up a last-16 meeting with America’s Frances Tiafoe. The 20-year-old was in tears on court after backing up his big victory over Kevin Anderson by coming from two sets to one down to defeat Andreas Seppi.

Rafael Nadal sent out a statement by crushing Australian hope Alex De Minaur 6-1 6-2 6-4. Nineteen-year-old De Minaur won the warm-up tournament in Sydney and had been touted as the home country’s best hope for success in the men’s draw but the scoreline was exactly the same as in their meeting at Wimbledon last summer. De Minaur showed great fighting spirit to make a game of it in the third set and saved five match points yet Nadal was simply too strong and moved through to an intriguing clash with Berdych. – Guardian service