Djokovic on track for final but faces hungry teenager Shapovalov 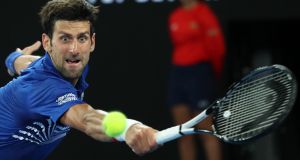 Serbia’s Novak Djokovic in action against France’s Jo-Wilfried Tsonga in the second round of the Australian Open at Melbourne Park on Thursday. Photograph: Lucy Nicholson/Reuters

Novak Djokovic is still the player to beat at this Australian Open. In a routine three-set workout against Jo-Wilfried Tsonga, the world number one looked as fit and lean as the first time he played the Frenchman here (in 2008, when he broke through for the first of his six Melbourne titles), although he will need to stay sharp to deter the hungry teenager Denis Shapovalov in the third round on Saturday.

The Serb has a relatively straightforward passage to the final, with Roger Federer and Rafael Nadal likely to meet in the semis on the other side of the draw, and, in a little over two hours on the Rod Laver Arena on day four, there was not much Tsonga could do to stop him winning 6-3, 7-5, 6-4.

“I thought I played pretty well for a set-and-a-half,” Djokovic said, “and I gained confidence in the third. It’s tough for Jo, who’s struggled with injuries the past year. But he’s always been a top player.”

Shapovalov, number 27 in the world, had to put the work in to get past the unseeded Japanese Taro Daniel in three competitive sets. The Canadian with the big game and towering self-confidence said: “It’s going to be awesome, just awesome, to play against Novak, to see how my game matches up against his. Honestly, there’s no pressure on me. He’s the favourite. I’m just going to give it my best shot and see what happens. I’ve been playing really good tennis so, if that continues, I could make it a tough match for him – even try to win it.”

As a junior, Popyrin won 22 matches in a row, collecting four titles, including the French Open boys’ championship, the first Australian to reign there since Phil Dent in 1968. Ranked the No 2 junior in the world, he immediately joined the full Tour, and is already ranked 149.

Like Alex de Minaur, who is leading the youthful Australian charge and plays the 2009 champion, Rafael Nadal, on Friday evening, Popyrin lives part-time in Spain. He has also trained with Patrick Mouratoglu and has hit with Serena Williams.

“Alex had an unbelievable week last week [when he won two matches in a day to become Sydney International champion], and is carrying it on this week,” Popyrin said. “It’s great to have two players the same age, who grew up together, playing some of the best tennis.”

Popyrin and De Minaur will be joined by Alex Bolt, the world number 155 from Murray Bridge in South Australia – who quit the Tour a few years ago to rediscover his enthusiasm for the game – against the buzzing Alexander Zverev. Bolt came through qualifying here and on Thursday beat the 29th seed, Gilles Simon, in five sets spread over four hours.

However, it is the other Alex – Zverev – who is Djokovic’s main threat before the final. The world number four came through some difficult patches before beating Jérémy Chardy in five sets, and said courtside, “What an amazing match. Jérémy fought so hard. He’s an unbelievable player. He showed again he’s a great fighter. It was always going to be an insane match.”

On playing Bolt, he said: “Obviously he’s going to be the hometown favourite. He quit tennis a few years ago and now he’s in the third round of the Open. It’s a great story.”

On a day that threw up the usual surprises, Kei Nishikori absorbed 59 aces to beat Ivo Karlovic – who also lost at Wimbledon last year, when putting 61 serves past Jan-Lennard Struff. The tournament leader here is the 6ft 11in American Reilly Opelka, who left Melbourne despite putting 67 aces on the Italian Thomas Fabbiano to bring his total to 107 in two matches.