Konta goes down fighting in the early hours at Australian Open

Muguruza edges a fascinating encounter which didn’t finish until 3.12am 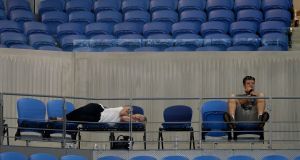 A spectator sleeps at Margaret Court Arena as s Garbine Muguruza and Johanna Konta played their second round match until after 3am at the Australian Open tennis championships in Melbourne. Photograph: Mark Baker/AP

Johanna Konta became the last of eight British players to leave the 2019 Australian Open, and in the most bizarre circumstances, sharing the record for the latest ever start to a Grand Slam final match with her opponent, Garbiñe Muguruza.

Their second-round battle was also a wonderful spectacle, full of rich, ripped ground strokes from all quarters, dogged defence and high passion.

It was perhaps the best match of the tournament so far, watched by a handful of diehard fans and friends in the small hours of Friday morning in an echoing Margaret Court Arena when, but for a smattering of seagull droppings that rendered an alternative outside court unusable, it might have started and finished at a civilised hour.

The Spaniard, irritable and rattled for much of the two hours and 42 minutes it lasted after they got under way at 12.30am, dredged up two glorious shots to finish it at 3.12am for a 6-4, 6-7 (3), 7-5 win that put her into the third round on Saturday. But Konta can be proud of her contribution to a memorable if very odd occasion.

“She started better than I did, but I think I did a good job of raising my level to make it a competitive match,” Konta said.

“There were only a few points in it at the end. It’s not ideal for anyone to do any physical activity when it’s bedtime, but it is what it is and both of us were in the same boat.

“Once [Alexander] Zverev and [Jérémy] Chardy’s match went to a fifth set [on the same court], we were actually going to go out to Court No 3 to start, but there was seagull poo everywhere and they had to clean the court. That would have taken 10 to 15 minutes and we were in the same boat anyway.

“Ideally, both of us would have wanted to play earlier, but we don’t make the schedule and we both dealt with the same challenge. I think it’s more important to focus on the level of the match we had. It was actually a very good match. It was unfortunate that more people couldn’t enjoy it during the day.

“I think I played a great match. That had a lot to do with the chemistry between us and the way our game styles match up. Garbiñe and I, every single match has been three sets. So we obviously do feed off each other’s game quite well, to play at a high level. It doesn’t guarantee we will have epic battles every time but it shows some game styles match up better than others.”

She was disappointed with the result but encouraged by the performance, adding: “I look to take every opportunity to learn from every single match. I would have liked to have won and learned, but it didn’t go my way.”

The thousand or so fans who had waited for the match soon dwindled to a couple of hundred but, at the end, they stood and cheered in appreciation of players who accepted their chore with the stoicism of professional athletes used to such things – even though they could easily have had the match moved to the smaller, empty court number three.

Konta struggled to read the Spaniard’s rhythm in the early exchanges, shoving a backhand long from the baseline to surrender the first set.

However, her level rose sharply in the second, and stayed there until the end. She had the sniff of a break-back in the fourth game then saved two break points for four-all. By the time they got to the tie-break – with the roof now shut to keep out light rain – Muguruza’s confidence had dipped and Konta cashed in to force a decider.

They went shot-for-shot in the third but the pressure was on Konta, behind in the serving cycle. As the clock ticked past 3am, the British No 1 held to love to stay in the tournament, but Muguruza brought up match point moments later with a wondrous backhand winner, then sealed it with another.

Next up for Muguruza is the unpredictable Swiss, Timea Bacszinszky, who played way above her world ranking of 145 to beat the Russian qualifier Natalia Vikhlyantseva.

Serena Williams is still the raging favourite to win her eighth Australian title, and bring her total to 24, equal with Margaret Court’s career tally.

She hit 20 clean winners in only an hour and 10 minutes to dismiss the Canadian Eugenie Bouchard for the loss of four games, and is likely to be equally ruthless against the Ukrainian teenager Dayana Yastremska, who took an hour and half to beat the number 23 seed Carla Suárez Navarro, confirming that her first-round win over Sam Stosur was no fluke.