Australia wrap up first Test victory after skittling India for 36 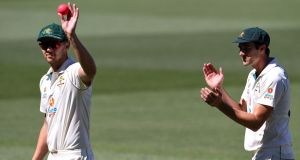 Australia’s Josh Hazlewood is applauded by fellow paceman Pat Cummins after taking five wickets as India were bowled out for only 36 runs in their second innings on the third day of the first Test at the Adelaide Oval. Photograph: William West/AFP via Getty Images

Australia crushed India by eight wickets inside three days of the first test at Adelaide Oval on Saturday, skittling the tourists for their lowest innings score in 88 years of Test cricket and taking a 1-0 lead in the four-match series.

Josh Hazlewood (5-8) and Pat Cummins (4-21) turned a tight day-night Test on its head in a devastating spell of pace bowling to open the day, ripping through the much-vaunted Indian batting line-up in less than two hours to dismiss the tourists for 36.

Australia’s batsmen, playing without pressure, chased down the victory target of 90 runs with some ease, opener Joe Burns giving his confidence a much-needed boost with an unbeaten 51 that included the six which secured victory.

If the tourists were shellshocked, the hosts were also taken aback by a turn of events which few would have predicted when India came out to bat with a 62-run lead and nine second-innings wickets in hand.

“Again, it shows the talent we have with the ball and when our boys execute, and there’s anything in the wicket, that’s what can happen.”

The margin of victory will be a hefty blow to India’s morale as well as their hopes of repeating their maiden Test series triumph in Australia two years ago.

None of India’s batsmen, including the prolific Virat Kohli and stalwart Cheteshwar Pujara, managed to get into double figures – only the second time that has happened to any team in a Test match.

Their innings score of 36 was the lowest in 544 Tests going back to 1932, worse than their previous low of 42 against England at Lord’s in 1974. Only two countries have managed fewer runs in the long history of the format.

“It’s very hard to put [my] feelings into words. We had a lead of 60 when we arrived today and just collapsed completely,” said Kohli, who lost for the first time in 26 Tests where he had won the toss.

“When you work hard for two days . . . to get yourself in a good position and then literally in an hour, you put yourself in a position where it’s impossible to win, it really hurts.”

That turnaround was down simply to the irresistible bowling of Cummins and Hazlewood, who in one early spell combined to take four wickets for no runs over 29 balls, delighting a socially distanced crowd of 15,026.

Hazlewood later removed Wriddhiman Saha and Ravichandran Ashwin in successive balls and even though he was denied a hat-trick, the big paceman bagged his eighth Test five-wicket haul in his next over when he sent back Hanuma Vihari caught behind.

The tourists will be without Kohli’s leadership for the remaining Tests in Melbourne, Sydney and Brisbane as the skipper returns home for the birth of his first child, but they will also be sweating on the fitness of Mohammed Shami.

The paceman took a blow to the forearm from a short Cummins delivery and was unable to bat on, bringing a premature end to India’s dismal innings when he retired hurt and headed off to hospital for scans.

The win extended Australia’s record in day-night Tests to 8-0 after their first meeting with India under the lights, but victory had not looked by any means certain even as recently as Friday afternoon.

Paine was named player-of-the-match for his unbeaten 73 on Friday that helped Australia stay in touch with India’s first-innings tally of 244 by scratching their way to 191.

The decision to look past Cummins and Hazlewood might have been a case of not being able to choose between them after what the former thought was up there with the very best outings for Australia’s pace unit in recent years.

“It was just one of those days where everything came off, everything we tried worked,” he said.