New Year starts with departure from Australia and the start of a 6,000-nautical-mile hike to Hong Kong 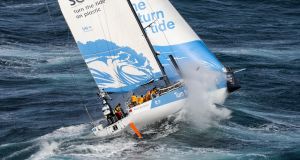 Our skipper, Dee Caffari, reckons we’ve proven our ability to match the best boats in the fleet in the early stages of the race. Photograph: Ainhoa Sanchez/Volvo Ocean Race

Back on board and on our way to Hong Kong!

After my planned rotation ashore for the third leg of the Volvo Ocean Race from Cape Town to Melbourne, I’ve rejoined Turn the Tide on Plastic and started the New Year with a speedy departure from Australia and the start of a 6,000-nautical-mile hike northwards to Hong Kong.

Upwind through Port Phillip Bay to begin the leg, and, just as we passed Sorrento, a huge RIB appeared alongside carrying a massive tricolour with a bunch of Irish friends who I stayed with three years ago for the Moth World Championships.

Once we cleared the sheltered waters of the bay, we were into the full force of wind against tide in open ocean and we were crashing through a nasty 3m seaway.

I’m not feeling fantastic; my time away from the boat showed soon enough, and a bout of seasickness started to take hold as soon as we reached the rougher waters, so I took my medication which is working okay.

It’s not ideal but hopefully I’ll be over it within 24 hours.

We’re already past the northern end of Tasmania, crossing the notorious Bass Strait and beginning to retrace much of the route of the annual Sydney Hobart Race that was sailed last week.

The strong south-west winds we have mean we’re averaging speeds of over 20 knots with the usual fire-hose conditions on board, but we’ll be passing Sydney just over two days out from Melbourne, so not a bad pace, really.

Leg 4 is a complex tropical stage that, in its early phases, takes the fleet up the east coast of Australia and then across the Coral Sea to the Solomon Islands before heading northwest through Micronesia towards Hong Kong.

But getting past the stormy extremes of this part of the world is going to involve a lot of manoeuvres as we gybe back and forth for the fastest wind angles until we reach the more tropical regions next week.

Our skipper, Dee Caffari, reckons we’ve proven our ability to match the best boats in the fleet in the early stages of the race, but where our team has fallen behind is briefly in the opening period of each leg, when we seem to lose speed, then settle and comfortably hold our own.

Our task is to avoid this, remain in contention with the leaders and achieve our goal of a leg podium result.

That said, during the stopover in Cape Town, we did actually take to the podium and it was thanks in part at least to my mum.

The Pro-Am series may not count towards the overall race result, but it’s a serious opportunity to gain sailing time. Having an Olympic veteran (Seoul 1988) at the helm when we finished in first place can’t have been a coincidence, so well done Cathy MacAleavey!

It was great having the time off to come home, especially over Christmas and also attend the Irish Times Sportswoman of the Year awards and be part of an amazing group of athletes.

One question I’ve been asked a few times is how basic the facilities are on board, considering this is a stripped-out racing boat. Without going into too much detail, the simple answer is non-existent: our toilet is broken.

Normally this means using a bucket but that isn’t really practical on a boat moving at high speeds with the decks awash. Other times, it means having to hang out over the stern and . . . well, use your imagination.

In the second leg, one of the lads thought he’d come up with a good solution. He lined the loo with a bio-degradable bag and, when finished, went to the hatch and threw it overboard. Except his throw wasn’t good enough and it landed in the cockpit where the crew on deck looked on in terror until the next breaking wave obliged and flushed it overboard.

The next throw was a bit better, but not by much. The bag got snagged in the out-rigger, far out of reach and away from most of the breaking waves. And there it remained for what seemed like days as everyone on deck prayed that the next wave would beat the bag’s breaking-down process.

Back on board after a month and with no refit in Melbourne, the loo is still broken.

Meanwhile, there have been more crew rotations and there’s a new dynamic on board that has a taste of home, although it’s quite confusing having two Brians on board.

Irish Brian is Brian Carlin who is the onboard reporter (OBR) for this leg on our boat, and he was also OBR when this boat was Vestas’s in the last race. He’ll be sending all the images and video back to race headquarters and posting live to the internet during the leg and he’ll be great for chats as well.

Brian Thompson is our navigator and had been due to start the race with us back in October but has only joined the boat now after recovering from a broken leg. Good news for us as he’s one of the most experienced ocean racing sailors in the world.

He has a strong connection with my family as my parents raced with him and the legendary Steve Fossett on Lakota in 1993 to set a new speed sailing record for circumnavigating Ireland in a time of just over 44 hours, a record that held for 20 years.

This leg ahead is going to be super exciting, plenty of challenges but interesting sailing waters and lovely conditions. I may have missed the Southern Ocean in the last leg but I’ll still have a turn at it in March when we race Leg 6 from Auckland to Itajaí in Brazil.

But that’s a long way off – more than 10,000 nautical miles away – and we have much to race for before then.