As ever, Ronnie O’Sullivan sparks debate at the Crucible 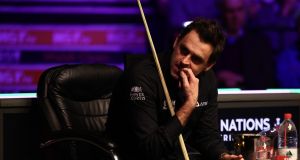 Ronnie O’Sullivan has never been far from the headlines during this year’s World Snooker Championship. Photo: VCG/VCG via Getty Images

From the automated crowd noise to the swathes of empty seats, nothing about this year’s World Snooker Championship has been normal. Well, almost nothing. Whether Ronnie O’Sullivan or Kyren Wilson is crowned champion on Sunday evening, they will have won a tournament like no other in its 93-year history – especially after Friday’s remarkable pair of deciding-frame thrillers. But despite all the peculiarity hanging over snooker’s flagship event and a sense that the sport has seized upon the opportunity presented to it post-lockdown, one man has again thrust the game into the spotlight like few others seem capable of.

Having already suggested snooker players were being treated like “lab rats” in the run-up to the championship, O’Sullivan had courted his share of the headlines. But even by his standards, his claim that he would “have to lose an arm and leg” to fall out of the world’s top 50, saying many at the lower end of the rankings wouldn’t even cope as “half-decent amateurs”, certainly was explosive.

Purists will argue that the fact the world No 89, Jamie Clarke, eliminated the world No 4, Mark Allen, proves O’Sullivan wrong. But what about those within the game, who ensured snooker was one of the first sports back playing after lockdown and, this weekend, will be the first to resume with fans in attendance for the final as the halted programme of pilots recommences.

“I love Ronnie, but I have to say something about that,” admits the 1997 world champion, Ken Doherty, who is still ranked inside the world’s top 64 and therefore, you could argue, an unintended target of O’Sullivan’s claims. “When he came out with that statement, it irritated me a little bit. He’s a genius on the table and whether he likes it or not, he’s an ambassador for our game; he’s our talisman.

“But there’s a lot of players around that level of the rankings who would have looked up to Ronnie, maybe even been inspired to pick up a cue by him, and to dismiss them wasn’t right. It’s not fair, and it’s not nice. I can’t sit back and let those claims pass through.”

The days of Bill Werbeniuk polishing off pints at the same rate he potted balls and players smoking cigarettes mid-match are long gone; snooker is expanding at a rate never seen before, and those within the game feel it has taken its chance to jump into the spotlight as one of the first sports to get back up and running post-lockdown with a series of tour events in June.

“I think people were starved, they missed sport and snooker has given them an opportunity in a few different ways,” Doherty explains. “To be the first back on television hopefully put some extra eyeballs on the game, and then for the Crucible to have fans back in before everyone else. I think that’s just a wonderful thing. Everyone from Barry Hearn all the way through the system at World Snooker have been incredible. The sport is hopefully going to benefit from this in the years to come.”

But with snooker’s Class of 92 – O’Sullivan, Mark Williams and John Higgins – now all into their mid-40s, O’Sullivan’s belief that those lower down the rankings are barely competent professionals suggests a challenge to maintain this momentum in the years ahead. Doherty, however, disagrees. “The standard has never been higher – even when Ronnie turned professional, it wasn’t this good,” the 50-year-old insists. “It’s always been good at the top of the game. But at the bottom, it’s never been this good.

“Look, nobody is as good as Ronnie and people are going to look inferior against him when he’s at his best. But those comments, I feel they were like spitting on the younger lads and making them feel small. As a man who proudly represents this sport, that doesn’t wash with me whatsoever.”

World Snooker is attempting to attract more youngsters to the game than ever before too, but in the immediate term there is the boost of a live crowd being able to witness the climax of snooker’s most prestigious tournament this weekend. “We’re in rude health as a sport,” Doherty insists. “We’re trying to get more snooker clubs open and take the game into schools and attract kids who maybe don’t like other sports such as football and rugby.

“But anyone who’s watched this championship will hopefully appreciate what a great spectacle it’s been. Whether Ronnie is in the final or not, it will be tremendous. We’ve all missed it as players, and as a pundit, it’s strange being camped at Stockley Park for the coverage rather than being in Sheffield. But letting the crowds back in this weekend is a great reward for the players and everyone who is trying to take this game to the next level. I couldn’t understand Ronnie’s comments, and I think you’ll see these young lads defy him and continue to get better.” – Guardian

Arlene Foster concerned by pitch invasion after Tyrone final 11:21
Adama Traoré is everything City hate - can they stop him this time? 11:00
All in the Game: It’s James not Bolt for Carlo Ancelotti 10:00
Liverpool’s win at Stamford Bridge felt like a Sadio Mané highlights reel 09:21
The Offload: Saracens prove Pro14 is not fit for purpose 09:00
Here is your handy guide to sport on television this week