‘We understand what’s going on in society right now, and we’re using this platform’ 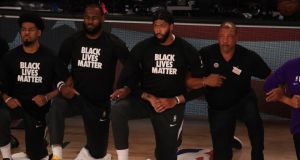 The NBA resumed from its coronavirus suspension with two games on Thursday, with the Los Angeles Lakers and the Utah Jazz scoring two-point wins.

Players wore Black Lives Matter shirts before the game started and all took a knee during the anthem, linking arms as they did so.

“Black Lives Matter” was painted onto the court, as the teams aimed to call attention to many issues foremost among them, police brutality following the deaths of, among others, Breonna Taylor and George Floyd in recent months. Various players had social justice messages on the backs of their jerseys - including “Black Lives Matter”, “Say Their Names” and “I Can’t Breathe” - and even the game referees took a knee during the pregame scenes.

With both games featuring Western Conference teams, the first-placed Lakers beat their second-placed local rivals the LA Clippers by 103-101, while the fourth-placed Jazz beat the 11th-placed New Orleans Pelicans 106-104.

The season has had to be drastically reshaped after a hiatus of more than four months.

Twenty-two of the NBA’s 30 teams have gone into a bio-secure bubble at Walt Disney World, Orlando, to play out the season, with teams most likely in contention for the play-offs being invited.

The teams will play eight regular-season seeding games before the standard 16-team play-offs will get under way.

The Lakers bounced out to a strong start against the Clippers, taking a 12-point lead at quarter time, before the Clippers bit back to lead by one point heading into the last quarter.

The Lakers kept cooler heads in the dying moments, a 27-24 last quarter lifting them to the victory, with Anthony Davis showing the way with 34 points and eight rebounds. LeBron James had 16 points, 11 rebounds and seven assists, and played a crucial role defensively at the death.

Paul George took 30 points for the Clippers while Kawhi Leonard had 28. New Orleans led 87-78 at three-quarter time but were blown away in a 27-17 last quarter.

Utah had many contributors, with Jordan Clarkson taking 23 points, and Mike Conley and Donovan Mitchell scoring 20 points each.

Brandon Ingram scored 23 for the Pelicans, while Jrue Holiday had 20.

“The game of basketball has always been bigger than just the ball and the rim and 10 guys on the floor,” Lakers star LeBron James said postgame on TNT.

“It’s an opportunity to use this platform to be able to spread a lot of positive, a lot of love, throughout the whole world.

“We understand what is going on in society right now, and we’re using this NBA platform as the players, as the coaches, as organisations to continue to stand strong on that. This is a good start. It’s great to have the NBA back. I hope our fans are proud of us tonight.”

Asked if the NBA is making a difference, James said, “There’s been progress. But in the past when we’ve seen progress, we’ve let our foot of the gas a little bit. We can’t do that. We want to continue to keep our foot on the gas, continue to push forward, continue to spread love throughout America.

“We are dealing with a lot of racism, a lot of social injustice, a lot of police brutality, not only in my neighborhoods, not only with Black people but with people of colour, and it’s something that we want to continue to have people’s ears open to. We have ears now, but we cannot stop with our foot on the gas as we’ve been doing over the last few months.”