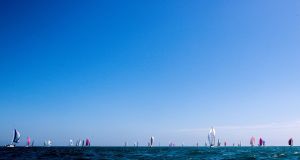 Wicklow Sailing Club has scrapped the Round Ireland yacht race with the next staging of the race to take place in June 2022. Photograph: Inpho

The 704 nautical mile Round Ireland yacht race, due to start on Saturday 22nd August, has been cancelled for the first time since it began in 1980.

The sharp rise in global Covid-19 cases has forced the organisers, Wicklow Sailing Club, to scrap the event with the next staging of the race to take place in June 2022.

The race had already been postponed following the introduction of initial Covid-19 lockdown restrictions. It was originally due to start in June and that date was pushed out to August with growing numbers of teams from Ireland, Britain and Europe heading towards a record turnout for the 40th anniversary of the race. Even with Covid restrictions in place, entry numbers for the rescheduled race held around the 50-boat mark.

“For a time, it seemed like we were on track to stage a successful race albeit with significant mitigation measures that people would understand,” said Kyran O’Grady, Commodore of Wicklow Sailing Club.

It is Ireland’s premier offshore yacht race and the second longest race in the Royal Ocean Racing Club calendar. The first race 40 years ago had only sixteen boats. Since then, however the biennial event has grown steadily.

The decision to cancel the event by Wicklow Sailing Club was taken “in the best interests of participants and volunteer support crews, and in response to concerns around the recent sharp rise in global Covid-19 cases.

“The global situation with the virus is precarious and while under some control in Ireland now, who knows where we might be in just a few weeks’ time,” added O’Grady. “We could easily run the race for entries from the island of Ireland only and possibly restrict visiting international teams from coming ashore before and after the race.

“But this runs against both the spirit of this classic race and our tradition at Wicklow Sailing Club of welcoming all competitors. Our competitors need certainty as soon as possible and our first priority must always be the safety of participants and those supporting the delivery of this sporting event.”

The current monohull record is held by George David in Rambler 88 who completed the course in 50 hours 24 minutes and 9 seconds in 2016. The multihull record time was set by the Sultanate of Oman’s flagship trimaran Musandam-Oman Sail at 38 hours 37 minutes and seven seconds in that same race of 2016.

Three skippers have won the race twice: Denis Doyle, Colm Barrington and Eric Lisson. No one has won outright more than twice.