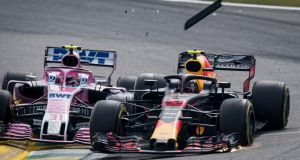 With his fifth title already secured, Lewis Hamilton had been explicit he wanted to end the season strongly. Yet while he did take the win at Sunday’s Brazilian Grand Prix in Sao Paulo this was an almost unexpected victory that had turned on a moment.

Max Verstappen had put in a superb drive only to be denied the top step after a clash left his chances spiralling away as Hamilton swept into the lead to ensure Mercedes clinched their fifth consecutive world constructors’ championship.

The win was far from one of the relentless dominance Hamilton has displayed in the second half of the season but he and the team did not allow it to dampen their ardour for a remarkable achievement.

With Hamilton’s fifth drivers’ title clinched in Mexico, Mercedes have now equalled Ferrari’s record of five consecutive drivers’ and constructors’ championship doubles the Scuderia scored with Michael Schumacher between 2000 and 2004.

“These guys have worked so hard over the past six years,” Hamilton said. “It’s been an incredible journey. This is what we’ve worked for every single day. I’ve always said it’s such an honour to drive for them.”

The team principal, Toto Wolff, reflected the satisfaction his team felt after they had been pushed harder than at any other point in the turbo-hybrid era. “It was a very difficult season,” he said. “We had ups and downs, Ferrari came back strongly and Red Bull at the end but that makes the championship victory even more enjoyable.”

But the race had been all about Verstappen, who could barely contain his fury by its close. Hamilton had started from pole and held his lead from the off but Mercedes could not push hard on their tyres as Red Bull’s race pace proved mighty and it quickly became clear the fight was with Verstappen.

He had started from fifth but charged from the off, in short order passing Kimi Räikkönen, who finished third, Sebastian Vettel and Valtteri Bottas to take second within 10 laps. He then drove a masterful stint, managing his tyres and staying out for 16 more laps than Hamilton before his stop. It enabled him to emerge on the quicker, soft tyres, which paid off.Four laps later Hamilton was powerless to resist as the Dutchman’s extra grip enabled him to sweep past for the lead on the start-finish straight.

He quickly pulled away and the race was clearly in the Dutchman’s hands until on lap 44 he was hit by Esteban Ocon at turn two, causing him to spin and drop five seconds to Hamilton and damage to his floor. Ocon was a lap down and trying to unlap himself, an unnecessary risk against the race leader who was in front through the corner. “What a fucking idiot,” was Verstappen’s response. Ocon was given a stop-go penalty for the incident, cold comfort for Verstappen as Hamilton was able to hold his leadheld on to the flag.

Verstappen was understandably furious, a mood that had clearly not improved by the end of the race and the situation looked like flaring up as he repeatedly shoved Ocon in the weigh-in area. “We are passionate about the sport, it would be odd if I shook his hand,” he said. Both drivers were subsequently summoned to the stewards.

Verstappen could have given Ocon more room but clearly did not expect the Frenchman to keep coming at him, understandable given he was leading the race. “We did everything today,” he said. “He [Ocon] was such an idiot he gets taken out while he’s being lapped.”

He was backed by the Red Bull team principal, Christian Horner. “As a lapped car you should not interfere with the leader,” he said. “What was Ocon thinking of there, it beggars belief. It makes no sense at all.”

He also defended his driver’s post-race actions. “Esteban was lucky to get away with a push to be honest. Max has a lost a victory through no fault of his own. It is hugely frustrating to lose a victory through a back marker.”

For Hamilton however the win was all as he and the team rightly celebrated. The record book will show only the victory and one that maintains an extraordinary record that illustrates his dominance for half a decade. He has now averaged 10 wins every season since 2014. Verstappen once again proved his credentials but ultimately the weekend belonged to Hamilton and Mercedes. - Guardian

1 Monica Seles: The warrior queen who could have been the best ever
2 Donnacha O’Brien takes first Classic as Fancy Blue wins French Oaks
3 Valtteri Bottas takes Austrian Grand Prix as Lewis Hamilton is demoted to fourth
4 Marcus Rashford ‘blessed’ to be fit again and back in the goals
5 Ferrari’s Charles Leclerc ‘will not take the knee’ before Austria GP
Real news has value SUBSCRIBE