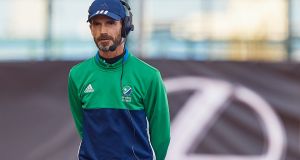 An emotional Alexander Cox admitted he will have to consider his position as Irish men’s head coach for the Olympic qualifiers following relegation to the second tier of the European Championships.

His side collapsed to a 4-0 defeat at the hands of Wales, ranked 14 places below Ireland, a first loss in 16 meetings between the sides dating back to 2006.

In a must-win tie, two first half goals from Gareth Furlong started the rot and there was no way back when Dale Hutchinson and Ben Francis cashed in.

It meant a last place finish and a B division berth for 2021. This was a third successive below-par tournament after a decade of consistent improvement, an alarming run of form with the Tokyo Olympic qualifiers under 10 weeks away.

In that context, Cox admitted he will consider his position.

“The most important thing is the group tries everything to get qualified for Tokyo. If I am the right one, I can’t tell you now,” he said.

“This tournament, obviously I wasn’t the right one. You have to be honest. As a coach, I am responsible and I failed to lead the group to better success in this tournament.

Indeed, the performances will continue to raise questions over the suitability of a part-time coach. Cox currently divides his time between the Irish side and his club job – which starts again next Wednesday – with SV Kampong in Utrecht.

Ireland’s rise to the top 10 in the world was overseen by full-time coaches Paul Revington and Craig Fulton but, similarly, had a dip under Andrew Meredith – a highly credentialed coach who remained working with St Pauli in Germany in tandem with the job.

Under Cox’s reign, the majority of training has been conducted in the Netherlands. Asked whether getting enough access to the players has been an issue, he said it was not an excuse given their relative time together compared to Wales and Scotland who they drew with earlier this week.

“Every game, we didn’t start well enough,” he said. “We trailed 2-0 and that’s something you can’t afford in a tournament like this. Against Holland and Germany, then that’s tough but also doing it against Wales, there’s something not well from the start.

“We were not able to change the way we played the game and not able to transfer the game into a situation where we were dominant team. On the ball, we didn’t create enough chances. In the big picture, a lot of things that needed to better. We didn’t defend how we can which was a problem.

“Up front, we couldn’t execute the half chances we did get. In the end, that’s the whole team. We failed as a whole group, including me.”