England need to get into the swing in Adelaide day-nighter 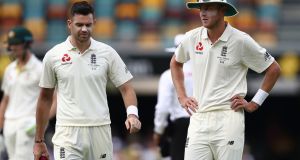 James Anderson and Stuart Broad: experienced duo will be pivotal to England’s hopes in the second Test at Adelaide. Photograph: Ryan Pierse/Getty Images

England must sweep aside the distraction of the Ben Stokes saga and get the ball swinging if they are to move back on level terms with Australia when day-night cricket makes its Ashes debut in Adelaide this weekend.

Speculation over the reasons behind Stokes’s trip to New Zealand have reached fever pitch in Australia but would no doubt be less intense had the tourists not crumbled to a 10-wicket defeat in the series opener in Brisbane on Monday.

Whether or not it was a ruse to get Stokes ready to play in a part in the series while a decision is awaited over a potential assault charge, it is certain that England will not be able to call on his considerable talents at Adelaide Oval.

They will have James Anderson and Stuart Broad on board, however, and it is the prospect of the experienced pace duo getting the ball moving that has had the second of the five Tests long marked out as the most likely for an England win.

Two statistics would suggest a victory in Adelaide is all but essential if the tourists are to retain the Ashes they won with a 3-2 series triumph on home soil in 2015.

None of the six previous day-night Tests played anywhere in the world have finished in a draw, and only once has a team come from 2-0 down to win an Ashes series – when Don Bradman’s Australia achieved the feat in 1936-7.

While Anderson and Broad shared 10 wickets when England won their maiden day-night Test against West Indies earlier this year, Australia’s pacemen have used the Kookaburra pink ball to win all three of theirs – two of them at Adelaide Oval.

“It is a unique ball,” said England’s Chris Woakes. “We have not bowled a huge amount with it. We had the warm up game here so we can draw on that experience of winning that game and hopefully that can stand us in good stead.”

Still the most picturesque of Australia’s Test venues after a sympathetic modernisation, the Adelaide Oval has shed its reputation as a batsman’s paradise since drop-in wickets were introduced in 2013.

The grass will be left a little longer than usual to avoid wear and tear on the pink ball and Australia coach Darren Lehmann is of the view the wicket gets even more pace-friendly under lights.

“There’s a lot of talk about it’ll seam and it’ll swing,” Lehmann said this week.

“The ball stays pretty good, but you can make runs if you play well. And it does quicken up at night – probably the fastest wicket around Australia at night – so that’s going to be interesting.”

Australia are likely to stick with the pace trio of Mitchell Starc, Josh Hazlewood and Pat Cummins, ably aided by Nathan Lyon’s off-spin, after bouncing England out in the second innings to win at the Gabba.

England know they need improvement in all parts of their game to get back into the series, not least finding a way to dismiss Australia skipper Steve Smith.

However much it was laughed off afterwards, the Jonny Bairstow “headbutt” saga will also have illustrated to the first time tourists in Joe Root’s party that the Australians will use any means to unsettle them.

If they can put their hosts under sustained pressure in the Adelaide twilight, however, it could be ‘game on’ for the series when England head to the third test in Perth, with Stokes or without.