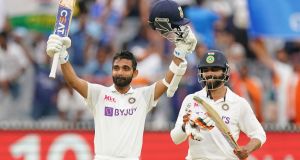 India’s Ajinkya Rahane celebrates after reaching his century as Ravindra Jadeja applauds during day two of the second Test Match against Australia at the MCG in Melbourne. Photograph: Scott Barbour/EPA

Ajinkya Rahane defied the weight of the India captaincy and scored arguably the most important century of his international career against Australia on Sunday, with his unbeaten knock of 104 drawing praise from regular skipper Virat Kohli.

Rahane’s performance on the second day of the Boxing Day Test in Melbourne was a soothing balm for the tourists, who are still smarting from their thrashing inside three days in the opener in Adelaide where they registered their lowest innings total of 36.

“Another great day for us. Proper Test cricket at its best. Absolutely top knock from Jinks,” tweeted Kohli.

With Kohli leaving the wreckage of the Adelaide Test behind him as he returned to India for the birth of his first child, Rahane was left to pick up the pieces at the MCG and responded in emphatic style.

In addition to his cultured batting on Sunday, Rahane’s deployment of the leg-slip position to dismiss three home batsmen on Saturday impressed pundits, including former Australia captain Ricky Ponting.

Looking to shake things up after Adelaide, Rahane made four changes for the second Test and his picks have already made significant contributions in the first two days.

Rahane helped consolidate India’s position by adding 57 runs with the recalled Rishabh Pant and took India past Australia’s first innings score of 195 with his burgeoning century-plus partnership with Ravindra Jadeja.

Rahane was dropped twice in his knock, which brought up his 12th Test century, but it was still an education for Gill.

“This knock was all about patience,” the 21-year-old said. “When you play such high-quality bowling attack, you sometimes go into a shell and you are not able to score.

“The way he played, it was such a magnificent knock to watch.”

Kane Williamson is all business when he takes the crease but playing alongside one of New Zealand’s all-time greats is still a lot of fun, said wicketkeeper BJ Watling after the hosts took control on day two of the first Test against Pakistan on Sunday.

Williamson completed his 23rd Test century at Mount Maunganui, showing why he is considered one of the premier batsmen of his era.

“He has just become a father, and it was a special innings for Boxing Day. He just set us up for a big total,” Watling said after the hosts posted 431 in their first innings and reduced Pakistan to 30 for one in the series opener.

Williamson hit 12 boundaries and a six in his 129 before Watling (73) added 66 runs for the seventh wicket with Kyle Jamieson to stretch their tally.

“You can look at some his shots, and he’s pure class,” Watling said of his captain.

“Twenty-three centuries is pretty special, and he’ll hate me for saying it, but he’s right up there among New Zealand’s greats, isn’t he?

Opener Dean Elgar fell five runs short of a century as South Africa climbed to 317 for four at the close of play on day two of the first Test against injury-hit Sri Lanka at Centurion Park on Sunday.

Faf du Plessis (55 not out) and Temba Bavuma (41 not out) will resume on the third morning after adding 97 runs, hoping to push South Africa past the visitors’ first innings score of 396 after two free-scoring days that have produced 713 runs at a rollicking rate of 4.24 runs per over.

That would suggest a batting paradise, but the wicket has given assistance to the bowlers, with both sides perhaps guilty of erring in line and length and not taking advantage of the pace and uneven bounce.

“It is one of those wickets where if you apply yourself and simplify your game plan, you can score runs,” Elgar told SuperSport at the close.

“We have changed the momentum through the day and potentially have it back in our changeroom after a tough day yesterday.

“We want to only bat once on this wicket and then it is up to the bowlers. We probably need another 200-plus runs tomorrow.”