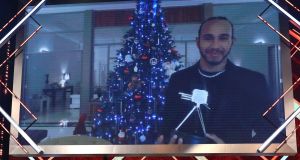 Lewis Hamilton was named the BBC Sports Personality of the Year, putting the seal on a year of exceptional professional achievement and political activism that sought to change the shape of the sport he has dominated for a decade.

Hamilton won a public vote ahead of fellow nominees Stuart Broad, Hollie Doyle, Tyson Fury, Jordan Henderson and Ronnie O’Sullivan. In November he won his seventh world title, a record shared with Michael Schumacher. He was also staunch in his support for the Black Lives Matter movement and launched the Hamilton Commission to effect “real, tangible, and measurable change” in the diversity of motorsport.

“I am so so grateful to the British public,” Hamilton said. “I think it’s been a long journey together. I know there’s been a huge amount of support, particularly in the UK but also around the world with Brits going across all these different races. And so for them to call in tonight, and award me this great honour, I’m really just so grateful.

“This year has been such a year of growth, amongst the difficulty that we’ve been faced with, but I feel like I’ve really found my compass this year. And I feel like there’s this huge amount of work to do in so many areas. And this is probably one of the first years I felt like I’ve had something different driving me at the core, pushing for diversity within our industry, using my voice for something far bigger than myself.”

Marcus Rashford was not in the running for the main prize, but symbolised the unique nature of this year’s ceremony as he collected a panel special award for his charitable work during the pandemic.

Rashford’s determination to “end child food poverty” drew an outpouring of public support and more than one U-turn from the government. The 23-year-old’s support for those enduring circumstances he experienced as a child showed not only the influence of sports stars, but the human spirit in what was a rare glimmer of light in a bleak year.

“For me it all started growing up as a kid,” Rashford told the presenters, Gary Lineker and Gabby Logan, on a socially-distanced stage in Salford’s MediaCity. “I believe that I started a 100-metre race 50 metres behind everyone else. It was more difficult for me to do the basic things. It was a nightmare, but in the end I got to where I wanted to get to, and ever since I’ve had this thing eating at me to do my best to protect the next generation.”

Due to the disruption caused by Covid, there were a number of changes to Spoty’s usual glitzy production values. While some of the six nominees for the main prize were in attendance, there was no studio audience. Instead a video wall of a 1,000 screens showed former winners, members of the public and NHS staff.

Another consequence of the pandemic was more welcome, as the show put an extra emphasis on community and grassroots contributions. In turn, the emotional moments of Spoty were even more affecting than usual. A case in point was the Capt Tom Young unsung hero award. The new prize was named after the centenarian Capt Tom Moore, who raised £38.9m for NHS charities during the first Covid wave, and was himself the winner of this year’s Helen Rollason prize for “inspiration in the face of adversity”.

Nine-year-old Tobias Weller was named the young unsung hero. Inspired by Capt Tom, Weller, who has cerebral palsy and autism, completed two marathons on his walker this year and has so far raised more than £150,000 for Sheffield Children’s hospital and Paces School.

Receiving his prize from Capt Tom in a prerecorded meeting, the mutual recognition and warmth between the pair was inescapably touching. “He was so inspirational for me during my marathons and now I’ve met him in person,” Weller said as he stood under a gazebo with his mother, 5 metres from Capt Tom. “I just feel tremendous.”

The adult unsung hero award, often the emotional centre of the show, was given posthumously to Matiu Ratana. Matiu, known as Matt, died in September when he was shot by a suspect while on duty at Croydon police station. The New Zealand-born officer, who served the Metropolitan police for 30 years, also volunteered as head coach for East Grinstead rugby club. He was the subject of an inspiring video tribute from his family and former colleagues who announced the launch of the Matiu Ratana Rugby Foundation.

Liverpool won the team of the year award and their manager, Jürgen Klopp, the coach of the year after an imperious season in the Premier League led to their first title in 30 years. Along the way, and despite a four-month interruption due to the pandemic, Liverpool set records for the greatest number of home wins (18), the most consecutive wins (18) and the greatest lead held at the top of the table (25 points, though this reduced to 18 by the end of the season).

The Reds’ captain, Jordan Henderson, was one of the nominees for the main prize and received a commendation from Klopp, who wrote and read a letter to the 30-year-old, praising his ability to overcome criticism and to unite a team “with not one superstar, but you are a superstar in making the team work”, Klopp said.

In the other prizes awarded on the night, Andrea Spendolini-Sirieix was named the young sports personality of the year after she claimed her first solo international gold medal at the Fina Diving Grand Prix. Khabib Nurmagomedov was voted world sport star of the year by the public. The UFC fighter retired in the summer after a professional record of 29 wins and no losses. - Guardian