World champions Netherlands, Germany and Britain are all in Ireland’s pool 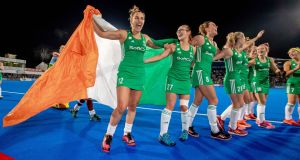 Irish players celebrate qualifying for the 2020 Tokyo Olympics after their win over Canada. Photograph: Morgan Treacy/Inpho

After the International Hockey Federation confirmed the pools for next summer’s Olympic tournament over the weekend, Ireland now know the nature of the challenge that will face them in Tokyo with the three medallists from the Rio Games among their opposition.

World champions the Netherlands, silver medallists in 2016, Germany, who took bronze, and reigning Olympic champions Britain are the top seeds in Ireland’s pool which is completed by two nations ranked below them, India and South Africa. A top four finish is required to advance to the quarter-finals.

South Africa’s inclusion in the line-up comes as a surprise in light of their federation having earlier insisted that the team would not be sent to the Games, partly because their world ranking wasn’t high enough. If they had not been entered, then even a defeat to Canada in that shoot-out in Donnybrook would have seen Ireland qualify for Tokyo - so, as it’s turned out, they needed to triumph that night to earn their place.

Pool B is made up of Australia, Argentina, New Zealand, now coached by Graham Shaw, Spain, China and hosts Japan. The match schedule will be issued by the FIH at a later date.

Back home, Loreto came from a goal down against Pegasus to end the defending champions’ perfect start to the Hockey League, beating them 3-1 at Beaufort. Alex Speers had given the Belfast side a first quarter lead, and they had plenty of opportunities to stretch that advantage, not least from a string of short corners. But having weathered that early storm, Loreto turned the game on its head, Sarah Torrens and Sarah Evans putting them 2-1 up in the third quarter before Hayley Mulcahy sealed the victory in the final period.

Pembroke Wanderers have gone top of the table, on goal difference ahead of Pegasus and Old Alexandra, thanks to their 2-0 win away to Cork Harlequins, Orla Macken, with her fourth goal in as many games, and Aisling Naughton their scorers. Alexandra also enjoyed a fruitful visit to Munster, a goal in each half from Irish international Nikki Evans, her first for the club, and Emma Russell giving them the points against Limerick’s Catholic Institute.

After a shaky start to the campaign, UCD have now picked up two wins on the trot, the students recovering from conceding a goal just before half-time to beat Belfast Harlequins 3-1 at Deramore Park, Sarah Patton, Ellen Curran and Niamh Carey their scorers. And back in Dublin, Railway Union came from two goals down to earn a draw away to Muckross, Orla Fox and Hannah de Burgh Whyte cancelling out earlier efforts from Anna O’Flanagan and Sophie Barnwell, all the goals coming in the first half.