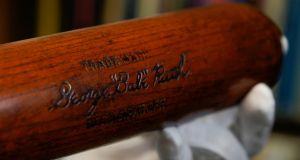 Babe Ruth is poised to hit another home run, only this time on the sports memorabilia market when the bat he used to hit his 500th home run nearly a century ago goes to auction on Wednesday.

Known as the “Sultan of Swat” during a storied Major League Baseball career, Ruth, who died 1948, is now the King of Memorabilia, with the ash bat the New York Yankees batter used on August 11th, 1929, to become the first player to hit 500 home runs expected to fetch well over a million dollars.

Of the top 20 highest priced sports memorabilia items almost half (nine) have the Ruth name attached. In June, a Yankees jersey worn by Ruth went for $5.64 million, making it the most expensive piece of sports memorabilia ever sold, while the bat he used to slam the first ever home run at Yankee Stadium sold in 2004 for $1.26 million.

Online bidding for the bat begins on Wednesday. By the time it closes on December 14th, it will almost certainly find a spot in the top 10.

Unlike some items that have changed hands several times, Ruth’s 500th home run bat has spent decades out of sight in undisturbed solitude. Ruth gifted it some time in the mid-1940s to the mayor of Suffern, New York, Jim Rice, a golfing, bowling and drinking buddy of the baseball’s hall of famer.

For decades the historic bat leaned impassively in a corner of the Rice family den, treated not as a piece of history but more like a piece of furniture no different than the bookcase and coffee table. After Jim and then his wife passed away, the bat spent three decades hidden in a closet in the home of their only son Terry.

The childhood joy Terry had revelled in from owning such a sporting treasure has given way to dread, the bat too valuable to display or even tell anyone about.

“It just got to the point I couldn’t leave it out,” Rice told Reuters. “I was less cautious years ago but more recently I hardly told anybody. I just couldn’t enjoy it, it was hidden away. My girlfriend was afraid to have it here, that somebody would break in so we weren’t enjoying it.

“It just seemed time,” he said.

As much a piece of art as an historic artifact, Ruth’s 500 bat has been painstakingly authenticated by industry leaders PSA/DNA, who have given it their highest grade. Traced back to the manufacturer, the bat matches the model number, size, weight and finish ordered by Ruth, and displays unique characteristics such as a left-barrel contact area and cleat impressions on the upper barrel.

Leona Maguire left playing waiting game 21:52
Barcelona and Bayern battle for right to take on nouveau riche 20:44
Caldwell makes himself at home at Celtic Manor 20:32
Anderson swings back into form against Pakistan 19:52
Selby strikes back against O’Sullivan 18:44
Here is your handy guide to sport on television this week