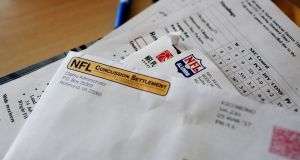 Some of the mail Walter Carter, who played for the Raiders and the Buccaneers, has received about the NFL’s concussion settlement, at his home in Florida. Photograph: Eve Edelheit/The New York Times 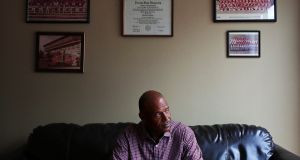 Walter Carter, who played for the Raiders and the Buccaneers, at his home. Photograph: Eve Edelheit 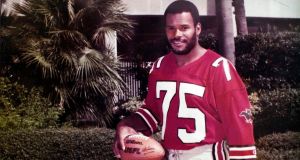 An undated handout photo of Walter Carter from his days with the Tampa Bay Bandits -- he also played for the Raiders and the Buccaneers.

The sales pitches were filled with urgency and emphasised familiarity. Act now or risk missing out on millions of dollars. Trust us because we are part of the “NFL brotherhood”.

“You have nothing to lose,” a former NFL quarterback implored in one, “but money you’re entitled to and that you earned the hard way.”

The pleadings are aimed at former NFL players who stand to receive cheques from the largest legal settlement in sports history, a pool of money that may top $1 billion for retirees who sued the league for lying to them about the dangers of concussions as they got their heads pounded on the field. Some players may get very little, but others with severe neurological diseases may receive as much as $5 million.

Now lawyers, lenders and would-be advisers are circling, pitching their services and trying to get a cut of the money. It may be standard practice for big legal settlements, but the fact that many players are cognitively impaired and may struggle to understand the terms of the services offered to them has raised alarm among player advocates, legal ethicists and the lawyers for the players who sued the NFL.

“I’ve been doing this litigation for a long time; there’s always been a certain amount of stuff going on, but I’ve never seen anything like this by a multiple,” said Christopher Seeger, a co-lead counsel for the players, who has received dozens of complaints from players and others about companies pitching sometimes dubious services.

“There’s a sex appeal to representing NFL players, and they are so identifiable, so these companies who are predatory, it is easy for them to be successful. Most of these guys are broke, so they’re vulnerable.”

While some of the firms may provide valuable assistance in complicated cases, others appear to be pitching services to ex-players who don’t need their help. The cottage industry of companies and law firms, going by names such as NFL Case Consulting, Concussion Case Management and Legacy Pro Sports and looking to help people file settlement claims, is largely unregulated, even if their pitches are for services that are usually unnecessary. And with the deadline to register for the settlement less than a month away, their pitches have become more aggressive.

The rush to recruit players prompted the federal judge overseeing the legal settlement case to issue an order in April saying that NFL Players Brains Matter, a company led by Fred Willis, a former running back, would no longer distribute “improper communications” to other players.

In an interview, Willis said he was a longtime advocate for players and accepted no money for helping them. “I’m not being paid, and I don’t need the money,” said Willis, who played for the Bengals, the Oilers and the Broncos. “This is not going to stop me from helping my brothers, and they know where I am coming from.”

The judge, Anita B Brody, also approved a notice that warned players about companies that, according to Seeger, offer to help players “navigate what are falsely portrayed as complicated registration, medical testing and claims procedures.”

Most of the claim-service providers require players to agree to share 15 per cent or more of anything they receive in return for helping them with a process that the providers portray, in stark terms, as unduly complicated. They also do not always tell players that they can call court-appointed experts to receive free advice on how to file a claim, or that they can visit doctors who will provide a free neurological exam.

Some lawyers have hosted dinners for former players at steakhouses to get them to sign up. Others have promised to get players appointments with doctors who will write diagnoses that make their medical conditions look worse than they are, according to players who have received pitches from some of the companies. Some lawyers have also hired former players to sign up their brethren, yet do not always disclose that the ex-players are being paid to recruit other retirees.

One firm hired Joe Pisarcik, the former New York Giants quarterback who until recently ran the NFL Alumni Association, as a pitchman. (Pisarcik did not answer telephone messages left for him.) Seeger said a few hundred of the approximately 20,000 players who are eligible appeared to have signed up for these services.

But some retirees have resisted the come-ons. Walter Carter, who played defensive end for the Oakland Raiders and the Tampa Bay Buccaneers, as well as in the USFL, has heard from at least a dozen companies pitching services. But Carter, 59, who runs a packaging company near Tampa, Florida, went on the website for the concussion settlement and realized he could file a claim on his own.

Although he was annoyed by the lawyers selling services he does not need, Carter is more offended by the retired players who are doing their bidding, including Pisarcik, who pitched him. “I watch how these attorneys work, and I think it’s a crime,” Carter said. But “most of them penetrate the confidence of guys by working with other guys. It’s the ultimate betrayal.”

Even players who may have taken fewer hits to the head than frontline players have been approached. Michael Husted, a kicker with four teams over nine NFL seasons, said he had received emails and phonecalls from at least half a dozen companies offering to help him file a claim.

Most of these companies made it clear they were less concerned about his health than about earning a commission, he said. “I was definitely surprised they were reaching out to a kicker, but then I realised the more people they get, the more money they might get,” Husted said. He said the process to register online for the settlement ? a needed step before filing a claim ? was straightforward and did not require a lawyer. “If you can read, you can fill it out,” he said.

Brody left open the possibility of cancelling agreements between these companies and any players they had enlisted. The NFL declined to make an executive available to discuss the issue.

Concussion Case Management and Legacy Pro Sports, which was started by a former player, said any misleading information on their websites had been corrected. The companies say they are advocates for players who have difficulty completing the needed paperwork, and that they charge far less than law firms.

“They want to tell you it’s simple and you don’t need to work with a service company or a lawyer ? but when you sit down with the player and tell him to go to this portal, get an ID number, if you’re a retired player with impairment, it’s not necessarily an easy process,” said Jerry Passaro, chief executive of Concussion Case Management, which charges players 12.5 per cent of any award from the settlement.

Brandon Siler, a former linebacker and a co-founder of Legacy Pro Sports, another service provider, said: “It hurts my feelings when something is written that we are taking advantage of players. We’re totally transparent about what we do. We are a consulting company that is educating these players.”

The concussion settlement has also attracted lenders who have been offering retirees loans worth tens of thousands of dollars that would be paid back with payouts from the settlements.

The loans, though, come with interest rates of 40 per cent or higher that can completely consume any cash from the settlement. In February, the Consumer Finance Protection Bureau and New York Attorney General Eric T Schneiderman sued a New Jersey-based financial company, RD Legal Funding LLC, accusing it of deceiving retired NFL players and “luring them into costly advances on settlement payouts with lies about the terms of the deals.”

Retired players are also learning about provisions in the settlement that allow Medicare, former spouses, banks and other potential creditors to recoup money by placing a lien on a player’s award.

Medicare and Medicaid, for instance, can recover money they have spent treating a player’s medical condition, something that could amount to hundreds of thousands of dollars for players with amyotrophic lateral sclerosis or Parkinson’s disease, two conditions covered under the settlement.

Seeger, the plaintiffs’ lawyer, said that claims specialists representing the players would negotiate discounts with Medicare and Medicaid. He declined to say how large they would be, but he said that after the government was repaid, players would still have a large portion of their award. Some players, though, may still need to pay contingency fees to their lawyers or repay unpaid child support or a bank or other lender. And of course, players who hired a claims service company will have to hand over 10 percent or more.

“With any middleman service, there are those who are doing it for a fair price and then you have people who are taking advantage,” said Ted Frank, a lawyer at the Competitive Enterprise Institute, a nonprofit that focuses on class-action settlements. “But no one is going to help me fill out my claim for a $5 coupon.”