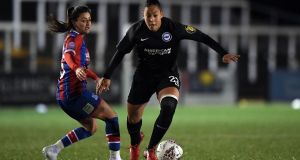 Rianna Jarrett in action for Brighton against Crystal Palace. “Obviously the opportunity to play full-time was fantastic and it was something that I was looking to do. But I’m not a 17 or 18-year-old kid, I’m 26 this year and I’ve been through a lot to get to where I am today.” Photograph: Alex Davidson/Getty Images)

For just a while back there, Rianna Jarrett admits, she was a little bit lost. Who could blame?

But a month into her first professional contract and on the eve of a likely start against Greece this evening in what looks a key game of Ireland’s qualification campaign for next summer’s European Championship, the 25-year-old from Wexford has her eyes firmly focused on her future again.

It looks bright right now for the Irish international whose career in the game only began because, as a young child, she nagged her mother to be allowed play football too having been brought along to watch her twin brother Jordan in action for their local club.

A couple of decades down the road, Jarrett is in fine form as she talks about life in Brighton where she made something of a dream debut last week. Few players have the first hand experience she has, however, of just how quickly things can take a turn for the worst again.

There were a few seasons there where just the mention of Jarrett’s name elicited sympathetic sighs from those who followed the women’s game. The young striker suffered three anterior cruciate ligament injuries before she had turned 22. By the time the third happened, even she was beginning to think that maybe enough was enough.

“I had a meeting with Dan [Horan, one of the physiotherapists to work regularly with the men’s senior international team] and he asked me what I wanted to get out of this,” she recalls. “I was thinking at that time that I only wanted to go and have a kickabout on the street with my friends and two brothers. And he was: ‘Okay, we can get you to that’.

“We had a detailed conversation and I had a little bit of a breakdown,” she continues, matter-of-factly. “That was fine. But when we spoke again later on, I said that I wanted to get playing for Wexford and hopefully international too.”

In the end, it would take her 14 months of hard work to complete the first phase of the journey and another year or two to really start believing that she could push on and try her hand at the professional game but that is where she is now.

“Mentally, I learned a lot about myself the third time around,” she says. “I was that little bit older when it happened. And not knowing whether I wanted to come back actually helped me in my return when I eventually did.

“I’d never really looked at going professional because there was a four-year spell where I’d played very little football. So for me, it was about getting back and then going from there.

“But I got back playing from June 2017, had half-a-season – that went well – and then I had full seasons in 2018 and 2019 which went well too. I spent a lot of time on the pitch, I didn’t miss too many training sessions and I was getting fitter and stronger.

“Around August or September of last year, I was like; ‘Maybe now is a time that I could look to go and play abroad’. I didn’t know if it was going to happen or not, but thankfully I got the opportunity and I have taken it now. We’ll see how I get on.”

She started putting together something to send to clubs in England when a conversation with Louise Quinn accelerated the process with her Ireland team -mate putting her in touch with her agent who quickly helped to open a few doors.

Her injury record must have seemed like a big “Beware” sign to quite a few of those who looked at her file but then there were the goals, so many of them, both for her American college side in Tennessee, where she was named the league’s most valuable offensive player, and Wexford, where she played a leading role in one of Irish sport’s less likely success stories. Brighton decided to take the plunge although initially only until the end of the current season.

They are clearly being cautious but Jarrett has no complaints. She says that the coaching staff, led by former England manager Hope Powell, have been patiently encouraging her to get herself fully fit following a lay-off that extends back to early November’s Irish cup final win for Wexford Youth Women against Peamount so as to establish herself at the club for the longer term. Two goals in a 3-0 cup win over Crystal Palace wasn’t a bad way to start making her case.

“It was nice to get on the pitch, to remember what it was like to play again,” she says with a smile. “It’s been a long four months.”

“It’s a step up from the WNL (Women’s National League); even in training you are in with girls who have been full-time for a number of years. But for me, I just wake up every day and it’s a breath of fresh air not to have to sit at a desk for eight hours. That’s the biggest difference. I have only been there four weeks and it’s still new but I am enjoying it.”

She continues, with the club’s backing, she says, to take it one step at a time. Having just graduated from the amateur ranks, the risk of injury is all the greater as she tends to be tired as a result of the higher pace of training and greater workload but she is happy that, like her, the club are in it for the long haul.

“Obviously the opportunity to play full-time was fantastic,” she says, “and it was something that I was looking to do, but I’m not a 17 or 18-year-old kid, I’m 26 this year and I’ve been through a lot to get to where I am today.

“For me, the biggest thing was making sure I had that reassurance that I wasn’t going to be put into a situation that wasn’t good for my health. But the way they put it was they weren’t investing in me to just throw me into the deep end where they couldn’t get the best out of me.”

Having taken just about four years to reach eight caps (her first goal came against Ukraine last time out) a fully fit Rianna Jarrett, one playing at the highest level on a weekly basis, would be a huge boost to Vera Pauw but that is not quite what the Ireland manager has on her hands for now.

Pauw spoke this week about getting perhaps 70 minutes out of the striker tonight in Tallaght. Right now, you get the sense that Jarrett would bet on that being enough for her to make her mark.