America at Large: Critics argue commentator is more strident about the colour of his toast than the sports he covers 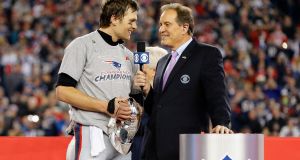 In the backyard of his home on the Monterey peninsula, Jim Nantz constructed a half-scale replica of the par-3 seventh hole at Pebble Beach. When visitors get the clubs out to try their luck, he pipes in the instrumental music that usually plays over fawning footage of foliage and flowers at Augusta National. Floodlights are provided for after-dark play, and the select few (including David Feherty, Tony Romo, Brandt Snedeker and Nick Faldo) who make a hole-in-one have their feat commemorated on a plaque by the tee box.

The seventh holds a special place in Nantz’s heart. The first time he took his then girlfriend Courtney out there, a rainbow appeared in the sky that convinced him they should be married. So that’s exactly the spot where they tied the knot in a 2012 ceremony attended by, among others, Arnold Palmer, Phil Mickelson, Tom Brady, Robert Kraft (New England Patriots owner), and former US president George HW Bush. On a perfect California day, Kenny G played his saxophone and a flock of seagulls – the birds, not the band – flew overhead as the couple exchanged their vows.

You may know Nantz from his syrupy commentary work at the Masters every April. For four days he speaks with the hushed-awe tone of somebody covering a papal funeral for Vatican TV before conducting an unctuous Butler Cabin interview with the Augusta National chairman at the tournament’s end. You may also know him from the Super Bowl. This Sunday’s clash between the Patriots and the Los Angeles Rams will be the seventh he has covered in his distinctly oleaginous style for CBS since 2007, and, over the next 120 days, he’ll also work the NCAA basketball final four, the Masters and the US PGA.

That quartet of box-office events has some calling him the voice of American sport, but it’s also the kind of sapping travel schedule that ensures he spends a lot of time in hotels. At breakfast every morning, no matter what corner of the US he is in, he will hand bemused waiters or waitresses a photograph of exactly how he wants his toast burnt. He’s not high-maintenance, apparently, he’s just a busy man with no time to waste on the road.

“It was costing me 10 minutes a day, which, multiplied by six days a week, is four hours a month,” said Nantz. “That’s 48 hours – two full days – per year. My friends, time is currency. My wife, Courtney, got tired of hearing me complain about it. She found a photograph on the internet of a kitchen toaster ejecting two slices of burnt toast. She minimised it, printed it out and had it laminated. She insisted I put it in my wallet. When I order, I present the photo to my server. I get some strange looks, but I can assure you, the toast now arrives black and scary, just the way I like it.”

His critics argue Nantz is more strident about the pigmentation of his toast than he has ever been on any of the issues concerning the sports he covers, consistently toeing the establishment line. As might be expected. After all, this is a man who paid for an 800sq ft putting green (that he named “41 National”) to be installed at the Bush family compound in Kennebunkport, Maine, so that his pal, the former president, could practise his stroke. Splurging on such a gift for one of the wealthiest old scions of American society might explain his apolitical stance on more pressing matters.

If it’s college basketball, he whitewashes the academic scandal du jour that may be plaguing the competing teams, not to mention the fact that entire corrupt industry is underpinned by a form of indentured servitude. If it’s the NFL, he will praise Philip Rivers for singing along to God Bless America during a drive but will get caught on a hot microphone dissing the players using the national anthem to protest police brutality.

“They’re gonna keep kneeling as long as they have cameras in their face,” he said.

At Augusta, where he coined the phrase “a tradition unlike any other”, the club’s long and shameful history of institutional racism and sexism has never once impinged upon his fawning commentary, although he did hilariously clutch his pearls about Tiger Woods swearing on the course a few years back. No doubt the plutocrats in the green blazers who kept the place exclusively white for so many decades loved that.

Before becoming easily offended at golfers berating themselves for bad shots, he was a talented hacker himself, playing at the University of Houston, where he roomed with Fred Couples and paid his fare by caddying at the Houston Country Club at River Oaks. After a couple of years, Nantz realised he wasn’t in the same league as his friend and turned his attention to becoming a broadcaster. The move paid off handsomely.

Today CBS pays him $8 million (about €7 million) a year, and his burgeoning commercial portfolio includes a deal with Titleist, his own wine collection and a personal brand of clothing with Vineyard Vines. Indeed, eagle-eyed viewers noticed that it looked like Nantz was wearing one of his new line of quarter-zip sweaters (comfortable and sophisticated and yours for just $248) when commentating on the Patriots’ victory in the AFC championship game two Sundays back.

A shill unlike any other.