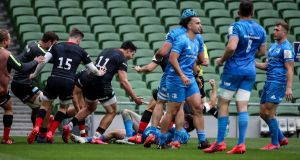 If only that level three-and-a-bit lockdown had resulted in Saracens being refused entry to Dublin. Instead, for all of you born since May 2019, what you witnessed was an unprecedented event. As BT’s Nick Mullins put it come full-time: “Leinster had forgotten how to lose – Saracens reminded them.”

Omen-wise, we probably should have seen it coming. Mullins, after all, had told us that the crowd sounds we were hearing were BT’s recording of the “50,000 voices from St James’ Park” in that 2019 game, so that’d be why the atmosphere seemed quite familiar – it was the same.

The only Leinster victory on the day, as it proved, was provided by Brian O’Driscoll, him being aware that even during an Indian summer, you can get hypothermia in the Aviva.

They’ve had their punishment, you can only respect Saracens for what they’ve been able to do

“Can I borrow your bobble hat, Drico? It is freeeeeezing,” complained a frostbitten Mullins, with a numb Lawrence Dallaglio noting the satisfied smirk on the face of the toasty BOD. Soon enough, though, events on the pitch left him chilled to the bone.

BOD had reckoned it would be a case of “Saracens against the world”, their financial naughtiness making them somewhat less than universally loved; but, despite that level of global opposition, they still found themselves 22-3 up at half-time.

Craig Doyle was close enough to having been rendered dumbstruck. “I can’t quite believe what we’re seeing here today,” he said, Sam Warburton and Ugo Monye a little disbelieving themselves.

It was almost 2011 all over again in the second half, but it wasn’t to be, BOD not even having a wet pub to visit to drown his sorrows.

“They’ve had their punishment, you can only respect Saracens for what they’ve been able to do,” said Ugo. “Put some respect on their name!” At a guess, half a million rotten tomatoes were chucked at telly screens.

There was no such upset over in Essen on Saturday where the Republic of Ireland’s women had the rather unenviable task of taking on the mighty Germany in a Euro 2021 qualifier.

“Everybody knows the difference between Germany and us,” said manager Vera Pauw. “It’s 32 places, eight European Championships and two World Cups.” That, then, put it in context.

Germany played exactly as we expected, but you first have to experience it to be able to fight it

Nor was it, Ireland trailing 3-0 at half-time and on course for much the same fate as suffered by Germany’s other group opponents: pulverisation. Peter’s panellists, Chloe Mustaki and Karen Duggan, looked like that thought might have been in their heads too, but there were to be no more goals, which suggested that this Irish team, while lacking the quality of the opposition, are fast learners.

“Germany played exactly as we expected, exactly as we trained for, but you first have to experience it to be able to fight it,” said Pauw, whose football analysis is never not interesting. “We adapted, we organised, that was the difference in the second half.”

She added: “This team has a ceiling, but we don’t know where it is,” the intent being to push it as high as her powers can muster. Certainly in time for their next, and crucial, group game. “Next month against Ukraine is D-Day,” she said. It is too.

Speaking of ceilings. Patrice Evra was fortunate that’s where Kelly Cates didn’t land him on Saturday.

Why, she wondered, hadn’t things worked out for Wilfried Zaha when he was at Manchester United? It’s probably fair to say that she never anticipated Evra putting it down to Zaha having “a true or untrue affair with [Blankety Blank’s] daughter. When that news came out, [makes loud popping sound], he was out of the game and he disappeared.”

Cates sensed there might well be trouble ahead. “We don’t know the background to that story so probably best leave that one just for now.”

Some time later. “Before we move on,” said Cates, “we have to clarify a comment made earlier in the programme suggesting that there may have been a relationship between Wilfried Zaha and [Blankety Blank’s] daughter. We understand that Wilfried Zaha has never met [Blankety Blank’s] daughter and that the claim made by Patrice was false and we apologise for any offence caused.”

Evra shrugged it off and focused on United’s humbling by Crystal Palace. “Like I say in French, deja vu. I’m tired. I’m a positive man, but I feel exhausted, and that’s just the first game of the season.”

Not half as exhausted as Cates probably felt after dealing with Evra and the [Blankety Blank’s] daughter issue.

1 Seán O’Brien: Anger over my parents’ break-up never left me
2 All in the Game: Klopp’s Amsterdam subs don’t go down well
3 The Offload: Outgoing Tom Grace will be missed by IRFU
4 Plenty of positives for Farrell as Ireland hit the ground running
5 Madness or defiance? The GAA is taking a huge gamble in staging Championships
Real news has value SUBSCRIBE
Here is your handy guide to sport on television this week