Pauw stresses importance of game against Ukraine on October 23rd 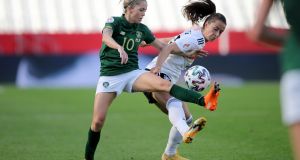 Vera Pauw broke from tradition by gathering her Republic of Ireland squad on the pitch at the end of Saturday’s defeat against Germany to convey an important message.

Ireland had just lost their unbeaten record in the European Championship qualifiers in Essen, Germany, the defeat in Essen their first in six qualifiers. Top spot in the group may be gone, but the hope of reaching the 2022 finals certainly isn’t.

“I don’t do that after games,” said the experienced Dutch woman. “I was proud of how the players performed against what for me is probably the best team in the world.

“We can still qualify for the finals, and the players don’t need to be embarrassed from losing. As the coach of the Netherlands for the 2009 European finals, Germany beat us 6-0 in the run-up to the tournament.

“The only way to get used to that top level is by feeling that level. Our players used that experience in 2009 to have a great tournament, losing narrowly to England in the semi-finals.

“With this Ireland team they didn’t collapse after conceding three goals in the first half. An improved second-half performance held Germany scoreless. That is something the squad should bring into the next game.”

Pauw has branded that outing against Ukraine on October 23rd as D-day. The requirement is fairly straightforward in that a draw would prevent the hosts usurping them for the runner-up spot.

For Ireland to avoid the risk of facing a superior force in the play-offs they must win to stand any chance of reaching the England-hosted showpiece as one of the best three second-placed finishers across the nine groups.

“We will travel to Ukraine looking for the three points,” said Denise O’Sullivan, the Ireland playmaker. “Since we beat them 3-2 in Tallaght last year, which was Vera’s first game, the squad have really grown.

“I never expected us to get anything from the Germany match. I’ve played against some top teams in the United States, but Germany have the technical ability added to their pace and power. We got better at dealing with them in the second half, and I think we can take positives into the Ukraine game.”

Ireland still have to host the Germans, but that concluding match of the campaign on December 1st in Tallaght is not one Ireland want to rely on for points.

Such was the sequences of matches that Ukraine heavily lost both of their meetings with the group’s top seeds before arriving in Dublin for a defeat much more surprising in nature.

They are finally starting to put points on the board, beating minnows Montenegro on Friday and they face Greece on Tuesday.

Pauw added: “We will start preparing for Ukraine now. They would have expected to beat Montenegro by more than the 3-1 scoreline, but they will a tough team to face.”

On 38 minutes, Lyon midfielder Marozsan unleashed a left-foot curler into the top corner, before a half-cleared cross was punished two minutes later by Lea Schüller adding a third by volleying in off the post.

“We gave Germany too much space in the first half,” said Pauw. “After showing the players some video clips at half time we applied much more pressure and it showed in a better performance.”