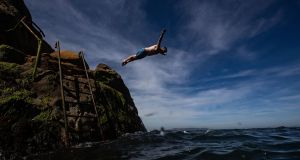 Fintan Nally jumps into the sea at the Forty Foot on Wednesday after it reopened to the public. Photo: Bryan Keane/Inpho

If all goes to plan and the coronavirus threat continues to decrease as it is currently doing so, the Irish rugby team will be set for one seriously busy spell at the end of August and into Autumn with a rescheduled Six Nations capping a seven-Test schedule. Leinster v Munster on August 22nd will hopefully get professional rugby back underway, leading into a non-stop run of matches finishing with the Lions touring South Africa in the summer of 2021, writes Gavin Cummiskey. Speaking of Munster, they are unlikely to recruit a new number 10 after Tyler Bleyendaal called time on his career due to injury yesterday. The province boasts a roster that contains Ireland international Joey Carbery, JJ Hanrahan, Jake Flannery, Ben Healy and Jack Crowley. Also this morning, Gerry Thornley looks back on the day Irish rugby came together to give peace a chance. It came after the Canary Wharf bombing in 1996, writes Gerry Thornley, as Hugo MacNeill and Trevor Ringland decided to make a stand.

In our sporting controversies series this morning, Johnny Watterson looks back on the early morning knock on the door which brought Pat Hickey’s world crashing down. It came at the 2016 Rio Olympics and set in motion the downfall of Hickey’s career. “The disturbing question as he was hauled into the hallway after years of a harum-scarum presidency and a pox on everything he saw as being on the wrong side of his beloved International Olympic Committee (IOC) was whether anybody even cared about the raid’s dubious integrity,” he writes. Meanwhile, Ireland’s queen of motorsport racing – Rosemary Smith – looks back on her career which included many highs, including becoming the oldest person ever to drive a Formula One car three years ago. Also in our women in sport pages, Rhasidat Adeleke tells Ian O’Riordan about a big year which has fallen away piece by piece after the Leaving Cert was cancelled and the World Under-20 Athletics Championships in Kenya went the same way.

1 All students will not return to school even if social distancing rules are relaxed - McHugh
2 Trump says, ‘I have the best words.’ Now this comedian’s going viral for lip-syncing them
3 We need to pay very close attention to what is happening in Britain now
4 What do you do when you meet a bear on a walk? Copy this 12-year-old
5 Emily Maitlis thanks BBC viewers for support after Cummings row
6 ‘Stick to the guidelines’ - People warned not to gather in crowds as sunny weekend approaches
7 Miriam Lord: Taoiseach is trapped in a Zoom session from hell
8 The human cost of Covid-19: new figures reveal the toll on Ireland's care homes
9 Donald Trump has one last chance to ensure his re-election
10 New rules for arrivals to Ireland start today - what is changing?
11 Four things that could help Ireland escape from the Covid-19 recession
12 Dave Hannigan: Trump gets the clubs back out as death toll keeps rising
13 Bake-off: Matt Damon bids farewell to bakery as he prepares to leave Ireland
14 What exactly will happen in phase two of easing restrictions?
15 Brazilian gang held in Offaly had sub-machine gun and student visas
16 Treatment ordered for man who could die due to neglect of personal hygiene
17 Church closes its doors after flouting public health rules
18 Ross O’Carroll Kelly column 'not racist towards English people'
19 Kinahan cartel ‘foot soldier’ jailed over failed plot to murder Patsy Hutch
20 Temperatures could reach 28 degrees today ahead of sunny bank holiday weekend
21 ‘Ireland should take calculated risk’ in greater easing of Covid-19 restrictions
22 Brown Thomas and Arnotts shoppers will be able to book time slots for entry
23 Call for certainty on Covid-19 payment as Doherty seeks extra €6.8bn
24 ‘Since coming out of lockdown I’ve been a mess, and I miss my children’
25 Irish banks’ failure to innovate could leave them written off for good
26 ‘It would be such a shame if Ireland were to lose its beautiful native tongue’
27 Why is a German court undermining the European Union?
28 EU needs to rebuild GDPR after only two years
29 Tempted by a weeknight barbecue? Here’s how the pros turbocharge their grilling
30 Tax and the Pandemic Unemployment Payment: Your questions answered
31 Britt Ekland: 'The Bond girl of my era exists no more'
32 Coronavirus: ESRI warns of deepest recession in Irish history
33 Trump to sign executive order on social media, White House says
34 World Rugby approve law trials to reduce player contact
35 Live beside the Edge in docklands penthouse for €1.7m
36 Leaving Cert: Teachers advised to ‘destroy’ documents relating to students’ grades
37 Two-metre rule, summer camps and golf considered by Ministers
38 Trump threatens to close down social media companies after Twitter fact-check
39 Dr Bob Rotella: ‘If you focus only on the target you’ll play darn good golf’
40 This is focaccia, but not just any focaccia
Real news has value SUBSCRIBE