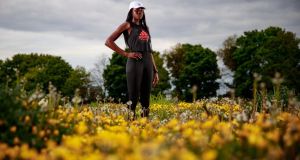 Rhasidat Adeleke is running through the list of cancellations – the Leaving Cert, the World Under-20 Athletics Championships, the regular sessions on the track at Tallaght – when she gets to the driving lessons. These are testing times in many ways, only at least the lockdown didn’t ruin everything there.

“Yeah, the lessons haven’t been going forward anymore,” she says. “So I’ve been doing a bit more with my mum, which has been interesting, good fun. Something else to focus on, look forward to, and entertaining too, trying not to crash into something.”

After a stellar track season in 2019, winning a rare sprint double at the European Youth Olympics in Baku, Adeleke was primed to go faster again in 2020 – all aimed at those World Under-20 Championships originally set for Nairobi, Kenya, in July, before Covid-19 took care of that.

“Yeah, I was absolutely distraught,” she admits. “I thought at first they might still happen later in the season, because at first they said it was just being postponed, and thought maybe even in the autumn they could happen, because Kenya has the weather for it. I was still training hard, and then they were cancelled outright for this year, which was so upsetting.

“I was so looking forward to Kenya, the experience, and had heard their fans are like the best in the world. It would have been unreal, so just really disappointed.”

It is expected those Championships will happen in July of 2021, and she’ll still be plenty young given she doesn’t turn 18 until the end of August. Still, Adeleke reckons it won’t quite be the same: “If they become an under-21 championships, the times and records wouldn’t count as much. I was just hoping for something this summer.”

Her sprint double in Baku last summer was the sixth championship medal in the short career of the then 16-year-old (Adeleke was also part of the 4x100m relay team that won the silver medal at the 2018 World Under-20 championships in Finland.) Her more immediate focus this summer was to be her Leaving Cert at Presentation Terenure, before that too was cancelled outright.

“I remember so well when they first closed the schools, everyone was so ecstatic. We really weren’t thinking it would last so long. We took enough books for two weeks, at first. Then we realised it was dragging on a lot longer, then the Leaving Cert was cancelled, now we’re hoping to have a virtual graduation, but we won’t see our friends for a while yet.”

It also means more than 60,000 students are set to receive calculated grades for the first time based on teachers’ estimates: “We were all a bit nervous about it, at first. But I’m lucky that I’ve been pretty consistent with class exams and schoolwork during the year. I know a few friends were saying ‘it’s not the Leaving Cert, it’s all right’ but hopefully I’ve done good enough in my exams so far to get the points for the course I need. But I feel it was the best decision.”

Given her success on the track (and Adeleke was also primed for another Irish Schools sprint double) would she have liked sporting prowess to also count towards those teachers’ estimates?

“I think that might be a little unfair, to other students. Maybe some teachers will like to factor that in anyway, maybe consider that athletes don’t always have the same amount of time to study. That would be down to the teacher, but as a whole, I don’t think so. You could probably say the same about any other pastime.”

In the meantime the Dublin-born athlete has been training, mostly alone on a football field near her home, still unsure when she might get back onto the track at Tallaght: “My coach Daniel Kilgallon lives outside the 5km radius anyway.”

As an ambassador for the Spar Daily Mile, which encourages primary school children to jog at their own pace for at least 15 minutes every day, even during the lockdown, Adeleke knows about the wider benefits of exercise during this time. “Staying at home all day can be difficult, and I know quite a few friends are doing things like going for more walks with their parents, getting more active, and hopefully they can continue that.”

She’s also hopeful the National Athletics Championships, pencilled for August 8th/9th, can still happen: “Definitely, we won’t be at our top form, but just to be able to compete, to have some sort of season, regardless of performances, to make some of the hard training count. That would be great.”