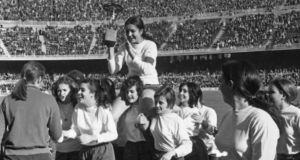 You live for about an average of 70 years. But if you leave people something to remember you by, you shall live forever.

Football, just like the world, has a tendency to forget its heroes. Examples run far and wide. Do you know the creator of the penalty? Do you remember Belfast born Bill McCracken who tampered with the offside rule, changing the football world as we know it? Or how about in Barcelona where you have the tragic story of Irish man Patrick O’Connell, also known as Don Patricio who became a legend in Spanish football to die in a pauper’s grave.

But away from the glitz and glamour of men’s football in Barcelona lies my favourite story of how the women’s team was established, through pioneers and a never-give-up attitude when everything is stacked against you.

In 1970, Agusti Montal, who famously went on to sign Johan Cruyff, was approached by a 17-year-old girl called Inmaculada Cabecerán Soler. Imma, as she is fondly known, was a huge football fan, attending games with her father bi-weekly and practising daily with her brother to become a futbolista.

Although the meeting was brief and lasted less than 30 minutes the signs were good regarding creating a new women’s team. It was met with disgust and dismay from three other managers, but Montal had given the green light . . . under two conditions. Imma had to organise the team and win every single game they competed in.

So Imma visited her local paper, the Barcelona Gazette, who published the following ad:

“Women’s football is making its way, and it is coming to Barcelona. So much so, that a nice lady has come to ask us for assistance in her desire to form a team of good players.

A thread of dedication & remembrance.

FC Barcelona mourns the death of Inmaculada Cabecerán Soler – the founding player of what is now Barça Femení.https://t.co/67IBdqXslf

“Inmaculate Cabecerán, as she is called, has the project to organise a women’s soccer team within the sphere of CF Barcelona [as the team was known during the Franco era]. For this, he took the first step, which was to speak with Mr Montal, who has welcomed the idea with sympathy but warning that he will give ‘yes’ whenever the team wins all the matches.

“Miss Cabecerán already has several players, but more is needed. To do this, she hopes that all those young ladies between the ages of 18 and 25 who naturally want to be part of this women’s football team, call 247 84 67 and Miss Cabecerán will inform them of everything. The possible aspiring players should keep in mind that the ‘debut’ of the team will be Christmas Day at the Barcelona stadium.

“As complementary information, let’s say that in the North there are already 24 women’s teams and in Madrid 3. So, ladies, to play football.”

Ironically, this appeal for players looked familiar to Barcelona fans as it reminded them of the advert that was put in Los Deportes on October 22nd, 1899, by Joan Gamper, the man who founded FC Barcelona in many respects.

After the call was answered by future legends such as Núria Llansà, Maria del Carmen Nieto, Lolita Ortiz, Núria Gómez and Vicenta Pubill, club president Montal quickly gave the girls a pitch to train and play on and followed it up with a coach, Antoni Ramallets, a legendary FC Barcelona goalkeeper.

To further solidify the program, Montal also made the Camp Nou available to the girls and organised a game for the women’s team against UE Centelles at the Camp Nou. The first football match played by a woman’s team in Barcelona was on Christmas Day 1970, the day of a charity festival, as the curtain raiser to the men’s team game versus CSKA Sofia. However, that team of Barcelona girls, who was not officially recognised by the Club, could not wear the Barça shirt or use the name FC Barcelona.

The 11 that played that Christmas day was called City of Barcelona Selection and wore a white shirt, blue pants and Barça stockings. These were the pioneers of Barcelona women’s football: Mínguez, Giménez, Gazulla, Vilaseca, Arnau, Jaques, Mayte, Cabecerán, Llansà, Estivill, Blanca, Lolita, Pérez, Nieto, Ros and Glòria. The game finished in a draw with Barcelona winning on penalties 4-3.

Nieto recalled later that while the game was a success, it certainly was greeted with scepticism, with one commentator repeatedly asking over the speaker, “Has her bra broken?” every time a player touched the ball.

In February 1971, the team changed its name to Penya Femenina Barcelonista and continued to receive support from FC Barcelona until the team was officially incorporated into the club in 2002, becoming what we now know today as Barça Femení.

Inmaculada Cabecerán Soler was a pioneer in women’s football with Barcelona. She passed away earlier this month and is a somewhat a forgotten figure in sports history, but the foundations she laid that day in a meeting with Augusti Montal live on.

You could be reading this , shrugging and saying, “what has this got to do with me?” But the weight of this story goes beyond the reader. It’s a story that should be used to provide inspiration and motivation for all the future stars that are growing up right under our noses.

So, to quote the Barcelona Gazette, let’s play football.