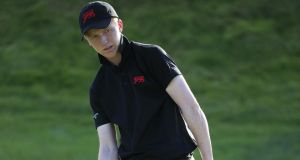 The United States will take a 10-6 lead into the final 10 singles matches in the Walker Cup in New York after this morning’s foursomes finished 2-2.

The GB&I team were looking to make inroads into the Americans four point lead but couldn’t manage it after sharing the honours in the foursomes. Irish duo Gavin Moynihan and Kevin Phelan produced a remarkable performance to win their game against Patrick Rodgers and Jordan Niebrugge two up.

Four down after seven holes against the Americans, the Irish pair won the eighth and ninth to halve the deficit by the turn and would square the match when winning the 16th. They completed a stunning comeback by winning the 17th with a birdie to go one up and then won the 18th for good measure.

Moynihan, the only GB&I winner in yesterday’s singles, will play in the bottom match, while Phelan is scheduled to go out third last.

The Americans will look to repeat the excellence they showed in yesterday’s singles. It had looked promising for the visiting side when they established a two and a half to one and a half advantage after the morning foursomes but they were blown away following the change of format.

The US were victorious in six of the eight singles with only Nathan Kimsey and Moynihan avoiding defeat for GB&I.

Kimsey claimed a half from his clash with Justin Thomas while Moynihan enjoyed a 2&1 victory over Patrick Rodgers. The afternoon struggles were in stark contrast to a morning session which GB&I edged.

The first match was halved with GB&I winning the next two before the United States won the final foursome of the session.

The first match-up saw home pair Cory Whitsett and Bobby Wyatt refuse to let the visiting duo of Kimsey and Max Orrin capitalise on the one up lead they held on six occasions.

Instead each time Whitsett and Wyatt came back to tie including on the 18th hole when Orrin hit his eagle putt 12 feet past the hole with Wyatt sinking a two-foot birdie to win the hole and halve the match.

Next up was Sheffield’s Matthew Fitzpatrick, who became the first Englishman since 1911 to win the US Amateur Championship — propelling him to number one in the world amateur golf rankings — and also win the Silver Medal at July’s Open Championship at Muirfield.

He was partnered by Neil Raymond and they went one up against Jordan Niebrugge and Nathan Smith at the par-four fifth, a lead they held until the 15th.

The GB&I duo won the par-five 18th when Raymond hit an eagle attempt to three feet and Fitzpatrick calmly rolled the ball in for a one up victory.

Raymond said: “To go out in foursomes over here and get the first solid point on the board was very important. I was just really happy to get it done. I believe in my ability, and obviously believe in the world number one [Fitzpatrick] over here.”

The visitors moved further ahead when Garrick Porteous and Rhys Ough defeated Michael Weaver and Todd White, three and one. Victory was clinched at the 372-yard 17th. Welshman Pugh hit his wedge approach shot to four feet.

Pugh said: “It gets my [competitive] juices flowing playing for Great Britain and Ireland. It’s an honour and brings the best out of me.”

The hosts then hit back in the final match of the session, Rodgers and Thomas defeating the Irish duo Moynihan and Kevin Phelan two and one.

The United States took a lead they never relinquished on the 15th before Rodgers recorded the clinching birdie on the 17th, hitting a 111-yard wedge to six feet.

1 Champions League draw: Manchester United handed tough draw on return
2 Leo Cullen: ‘It feels like it all came crashing down on top of us’
3 Dave Hannigan: How Christy Ring aroused the curiosity of American media
4 Dundalk versus KÍ in the Europa League: TV details, kick-off time and more
5 Johnny Sexton captains Leinster against the Dragons
Real news has value SUBSCRIBE

Novak Djokovic rings up career win number 70 at Roland Garros 19:17
Champions League draw: Manchester United handed tough draw on return 17:27
Leo Cullen: ‘It feels like it all came crashing down on top of us’ 15:41
Genoa’s Serie A match postponed over Covid-19 outbreak 15:25
Everton striker Dominic Calvert-Lewin among new names in England squad 14:36
Here is your handy guide to sport on television this week