Mourinho snubbed Hughes handshake after being told to ‘f**k off’ 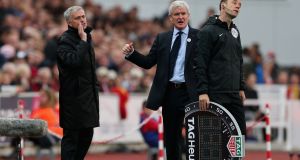 José Mourinho refused to shake Mark Hughes hand at the end of Manchester United’s 2-2 draw with Stoke City because he believed he was told to “f**k off” during the game by the Welshman.

In the second half at the Bet365 Stadium Mourinho and Hughes clashed and at the close the Portuguese shook hands with some Stoke staff but not their manager.

Afterwards Mourinho refused to elaborate on whether he had refused to shake though Hughes was adamant United’s manager did so.

However it is understood Mourinho thought he was told to “f**k off” by Hughes when moving near him on the touchline during the match. Mourinho also believed Hughes had told the referee, Neil Swarbrick, to send him to the stands for encroaching into the Stoke technical area. This followed an incident in which Hughes seemed to be upset at a United foul from which his team were awarded a free-kick.

The view at United is that Mourinho had wanted to organise his defence for the dead ball and that Hughes shoved him as he moved near.

Afterwards Hughes said: “I pushed him because he was in my technical area. Maybe that is why he didn’t want to shake my hand. It has to be viewed as a negative result for him. Sometimes managers of top-six clubs don’t take negative results too kindly. Maybe he reacted in the wrong way.”

Hughes has previously been involved in similar arguments with Tony Pulis (twice), Roberto Mancini, Martin Jol and Arsène Wenger. “In fairness I have my history with handshakes,” he said. “Maybe it’s me. I’m not quite sure I seem to get involved on handshake issues, I offered my hand but José didn’t want to take it from me, maybe he was a bit upset about the result, sometimes these top managers don’t have these results too often and can get upset.”