Tokyo Olympics wants Tiger Woods but will he be there? 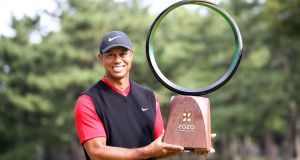 In November 2008, two officials from the International Golf Federation travelled to Switzerland to make a case for returning their sport’s athletes to the Olympics after a century-long hiatus. But as the men made their presentation to members of the International Olympic Committee, they realised they were pitching to an audience fixated on a single player.

Never mind the sport’s global reach or its charitable impact and cornerstone values of honesty and fair play. To Ty Votaw, who was helping make golf’s case for inclusion, it was clear from the start what the IOC considered golf’s greatest asset.

“The very first question asked was, ‘Will Tiger Woods play?’” Votaw said. Twelve years later, the Olympics still covet Woods – now, perhaps, more than ever. The problem is that there may not be a spot for him. In 2008, Woods’ participation seemed foreordained. He stood alongside Usain Bolt and Michael Phelps as one of the world’s most dominant athletes, and was coming off a season that had included his 14th major title.

For the 10th time in 11 years, he ended the year ranked No1. Woods, with his star power, and the Olympics, with their global stage, looked like a marriage brokered in a corporate boardroom.

Yet while Woods’ spirit was willing, a back injury sidelined him for most of 2016, sinking his hopes of qualifying for that summer’s competition in Rio de Janeiro. Golf returned to the Olympics without him, and Englishman Justin Rose won the gold medal.

Now, four years later, Woods is the closest he has been to the Olympics since he attended an archery event at the 1984 Games in Los Angeles with his father. To qualify, he must be one of the top four American players ranked inside the world top 15 as of June 22nd. Woods is currently seventh in the world, but only the fifth-best American heading into this week’s Farmers Insurance Open at Torrey Pines in San Diego.

At the moment, Brooks Koepka, Justin Thomas, Dustin Johnson and Patrick Cantlay hold the four Olympic tournament places reserved for Americans. Woods, 44, spoke last fall of his desire to participate in the Tokyo Games, describing it as a “once-in-a-lifetime experience.”

“And especially at the age I’ll be,” he said. It may comfort Woods that in the post-World War II era, two US Olympians, sailors Paul Smart in 1948 and Everard Endt in 1952, have won gold medals in their 50s. So it’s not necessarily now or never for him. But for an Olympic movement ravaged by the cancers of corruption and cheating, and reeling from the retirements of Bolt and Phelps, there would be no time like the present to plug into Woods’ transcendence.

“I know TV companies for obvious reasons are excited about it,” said Peter Dawson, the International Golf Federation’s president. So, it would appear, is the host country. In October, roughly 60 miles from the Olympic venue, Japanese fans cheered louder for Woods than they did their native son, Hideki Matsuyama, at the inaugural Zozo Championship, which Woods won wire to wire.

Yes, Woods is currently the odd man out among Americans. But that is, as Dawson joked, “nothing that another Masters win wouldn’t cure.” In 2016, the top four men in line to headline the Olympic field – Jason Day, Jordan Spieth, Rory McIlroy and Johnson – chose not to compete for reasons that included the fear of contracting the mosquito-borne Zika virus. This year, it’s possible an American player or two could be sidelined by something else: money.

The men’s competition in Tokyo will take place two weeks after the British Open and two weeks before the start of the three-tournament FedEx Cup playoffs, which offer a $60 million total purse, including a $15 million payoff to the eventual winner.

The first playoff event is outside Boston, 14 time zones from Tokyo, and so it is not unthinkable that a top player, prioritising majors over medals or playoff riches over Olympic gold, might decide that it’s not worth making the round-the-world journey to Japan at such a key moment in his season.

Could somebody also stay home because of outside pressure to step aside to make room for Woods? “There may be some of that,” Dawson said, though he quickly added, “I’m sure Tiger wouldn’t want to get into the Games that way.”

For the moment, Woods still controls his fate. After his victory last year at the Masters, he described the Olympics as “a big goal,” but he admitted “getting there and making the team is going to be the tough part.”

One option, Woods acknowledged, was that he might have to play more than he would like in the first half of 2020 in the pursuit of Olympic qualifying points. A strong finish this week, at an event he has won seven times, would be a great start.

“I just know that if I play well in the big events like I did this year,” Woods said last year, “things will take care of itself.” – New York Times