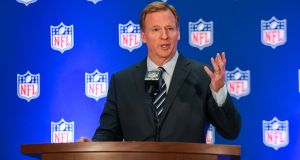 The NFL is currently negotiating a contract extension with its commissioner Roger Goodell. Among the supposed finer details are a demand for use of a private jet for life, health insurance for him and his family after he retires, and a slight bump in salary from $32m to just under $50m per year. Following a flurry of bad publicity after those almost Trumpian negotiating points leaked, it was pointed out Goodell already has a private jet for all league-related business. As attempts to mitigate negative press go, there have been better.

We know all this because, in the course of doing his job, Goodell has crossed swords with Jerry Jones, the larger than life and twice as garish owner of the Dallas Cowboys. Not the first mistake of his 11-year tenure. Maybe just the biggest. Having spent $2m investigating claims of domestic violence against the Cowboys’ talismanic running back Ezekiel Elliot, Goodell suspended him for six games. Aside from seriously denting the team’s Super Bowl ambitions, this also drew the ire of a 75-year-old billionaire used to getting his own way.

“I’m gonna come after you with everything I have,” warned Jones the day the commissioner informed him of the disciplinary action. “If you think Bob Kraft (owner of the New England Patriots who clashed with Goodell over the “Deflategate” ball scandal) came after you hard, Bob Kraft is a pussy compared to what I’m going to do.”

He has been true to his word. In tandem with a labyrinthine and ultimately ill-fated attempt to overturn the Elliot suspension in federal court, Jones has dedicated himself to scuppering Goodell’s contract extension and ending his regime. The fallout from the feud has been toxic and widespread. At one point last week, as Jones threatened to sue the league, there were whispers that the other 31 plutocrat owners might decide to force a man with a net worth of $5bn to sell the Cowboys altogether. That was shortly after somebody, with rather impeccable timing, released a 2013 video of Jones making a racist joke.

“What I’ve tried to do with every breath is to make the Dallas Cowboys better, and to make the NFL better,” said Jones, whose enormous profile led many over the years to regard him almost as the league’s ‘shadow commissioner’. “That’s what I try to do and that’s what I’m going to do.”

He made those comments during last Sunday’s loss to the Philadelphia Eagles, a result that turns Thursday’s annual Thanksgiving clash with the Los Angeles Chargers into a must-win if the Cowboys are to keep their playoff hopes on life support. For a man who commutes to work on an $8m helicopter his staff dub “The King’s Chariot”, watching an outfit that markets itself as “America’s Team” slide towards irrelevance this early in the campaign is galling and, in his mind, largely down to the treatment of Elliot.

Beyond Jones’ anger at what he somehow perceives as the unjust treatment of his star (there were no police involved in either allegation against Elliot), and putting aside the league’s current issues with falling television ratings, there’s a straightforward enough case to be made against Goodell having his contract improved and extended. For far too long, his handling of the CTE issue has bordered on the negligent and a failure to take it seriously soon enough may yet have severe consequences for the future of the sport at the professional level

Equally, his response to Ray Rice punching his then fiancée unconscious in an elevator in 2014 was stunningly insufficient and just plain wrong. Even after an ensuring public outcry embarrassed him into re-opening the case, Goodell appeared more interested in saving face than addressing the epidemic of NFL players and violence against women. He’s appeared tone deaf too when confronting the ongoing national anthem controversy, bizarrely struggling to understand why, in a league whose players are 70 per cent African-American, some might want to use their profile to heighten awareness of how badly their communities are being treated.

What might have been grounds for being let go under normal circumstances are all dwarfed by the spectacular improvements he has made to the league’s financial position. In an arena where money truly is all that matters, annual revenue has gone from $6bn to $14bn in the past decade, and Forbes estimates that the average value of clubs has doubled in the same time frame to somewhere around the $2bn mark. And, to put that in perspective, the Cowboys are now reckoned to be worth twice that.

Even against those startling numbers, those in the Jones’ camp were quick to point out last week that Goodell’s proposed new salary would mean he draws down more in a year than most owners take out of their teams annually. There are claims too that the commissioner’s office is top-heavy, overstocked with support staff earning seven figures. Whatever the merits of those criticisms, the rest of the owners aren’t buying what Jones is selling and earlier this week rebuffed his attempt to review the terms of the commissioner’s extension before it is put to a vote on December 13th.

Roger Goodell was 11 when his father ran for re-election to the US Senate in 1970 on the campaign slogan, “He’s too good to lose”. He lost the most important political battle of his career. Looks like his son won’t.