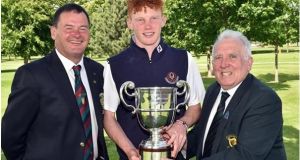 Kinsale’s John Murphy captured the inaugural Leinster Students Amateur Open Championship at Newlands last week. The 18-year old Maynooth University student has been playing well for three months, following his Munster Students Championship win at Cork Golf Club in March with impressive performances in the Irish Amateur Open, the French Strokeplay, an Alps Tour event and the East of Ireland Championship, where he was the leading Under 21 player.

Murphy added a final round of 70 to his earlier rounds of 67 and 72 to win by a shot from UCC and Waterford Castle’s Ben Murray.

Recently crowned Connacht Strokeplay champion, Eanna Griffin from Waterford and Maynooth was third, two shots off the pace after rounds of 71, 71 and 70 for 212. Cathal Butler, who grabbed a share of the third round lead thanks to a course record 64, slipped back with a closing 78.

Maynooth’s Shannon Burke won the Women’s title by a shot on 230 from teammate Meadbh Doyle with Clodagh Walsh third.

McCormack a 14-shots winner at Charlesland

Eddie McCormack from Galway Bay Golf Club won the Leinster Mid Amateur Open Championship at Charlesland. In conditions perfect for golf, McCormack, who set a new course record in the second round with his score of 69, carded a one under par third round 71 to win the by an impressive 14 shots on 211 from 2016 winner Jim Carvill from Banbridge. McCormack’s fine form has continued since the Connacht Mid Amateur Open Championship last month where he claimed the title by a shot.

Narrowly beaten in last year’s semi-finals, Paul McBride from The Island will try to recapture his 2016 form and leads a six-man GUI squad. Ireland’s six Walker Cup panelists have also been selected to represent the GUI at the European Individual, which takes place at Walton Heath.

Tullamore’s Stuart Grehan is currently the highest ranked Irish player in the world at 45 with McBride also inside the world’s top 100 at 74. Colm Campbell (Warrenpoint), Robin Dawson (Tramore), Alex Gleeson (Castle) and Conor O’Rourke (Naas) will also compete for the title, which was won by Rathmore’s Alan Dunbar in 2012. After two rounds of stroke play qualifying, the top 64 and ties qualify for the match play stages, which begin on Wednesday.

Ireland captain Tony Goode (Lucan) will accompany both sides along with team manager John Carroll (Bandon) at The Amateur Championship and Michael Delany (Laytown & Bettystown), who will serve as team manager at the European Individual.

O’Hara has had a terrific season and this victory and five-figure cheque is the icing on the cake - although the way he is playing there could be many more victories before the end of 2017.

Monkstown’s Cian McNamara tied for sixth with a three-under par 69 to finish on two-over par at the Castleknock venue, five shots behind the Scot, to pick up £2,225. Headfort’s Brendan McGovern led the field by a stroke on seven-under at halfway but finished tied for eighth on five over after closing rounds of 81 and 75 as Kilkenny’s Jimmy Bolger and Waterville’s David Higgins finished a shot further back in joint 10th.

The United States (-21) shot the low round of the day (-10) and came from six strokes back to retain the Boys Division of the 2017 Toyota Junior Golf World Cup in Toyota City, Aichi-Prefecture, Japan. It is the Americans’ ninth title in the 25 years of the event. Host Japan came in second place at 17-under while third round leader Thailand (-14) finished in third.

American Frank Capan - leader after three of the four rounds - claimed the boys’ individual title at 10-under. Kosuke Hamamoto of Thailand (-8) came in second while Denmark’s Gustav Frimodt (-7) checked in third. Shota Ueki of Japan and American Travis Vick - thanks to a final round 63 - tied for fourth at minus six.

In the Girls Division, the United States (-12) shot the day’s lowest round (-4) to complete the wire-to-wire defence of its championship. Japan (-7) was the other team in the field to finish below par.

American Alyaa Abdulghany (-7) had the lowest round in the field for the second consecutive day to claim the Girls Division individual trophy. Japan’s Yuna Nishimura (-3) took second - one shot ahead of Emilia Migliaccio of the United States (-2).

Killarney’s famed Killeen course will play host to the first of the AIG Cups and Shields Munster Finals next month. The 2010 & 2011 Irish Open venue will stage the semi-finals and finals of the AIG Jimmy Bruen Shield and AIG Pierce Purcell Shield on Sunday 16th July.

Ballykisteen have again reached the semi-final stage of the Bruen. They won a couple of tight matches with two matches requiring additional holes before the Tipperary side advanced. They will face Newcastle West and will be hoping that the recent experience will stand to them. East Cork pulled off a shock win in South Munster when they looked as if they were all but beaten in the area final. They will face Nenagh in the second semi-final.

Leinster have selected five of last years winning team as they chase a three in-a row Interprovincial when they travel to Carlow in three weeks time. Holland, Lester, Purcell, Rafferty and Yates were all on the winning side at Fota Island last year.

Team Captain Seamus McParland (Greenore) said “I’m feeling positive going into the Championship and confident that our team represents a great balance of youth and experience again this year”. New caps to the side include current Boys International, Mark Power (Kilkenny) who had good performances recently in the Irish Amateur Open and the East of Ireland Championship and Jake Whelan (Newlands) is the other new cap, who finished well in joint fourth position in the East of Ireland recently.

Current Internationals, Conor Purcell and Rowan Lester will add depth and experience to the team.