Shane Lowry: Masters was probably the worst I’ve played in a year 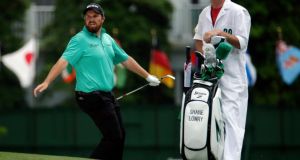 Shane Lowry during the Masters tournament in Augusta. “The only mistake is if you don’t learn from such bad experiences,” he says. photograph: Charlie Riedel/AP

I’ll tell you one thing: I found the perfect antidote for missing the cut at the Masters – moving into a new house. No time for too much reflection when you’re lugging your possessions backwards and forwards. I got back to Dublin from Augusta and spent the week moving and it’s true what people say – it is the most stressful thing you will ever do.

In its own way, though, it gave me some breathing space after Augusta National. Given that the move took up so much time, I actually didn’t do any serious work on my game until Tuesday when I got to Carton House and hit some shots and played some holes with my coach Neil Manchip, two balls each to double the work.

It wasn’t like that at the Masters, I know, where that hook off the tee crept in from nowhere. Missing the cut by a shot was frustrating. A quiet house with friends and family on the Friday night of a tournament is always a bad sign. A fortnight on, and I am very much looking ahead not backwards.

I’ll be honest, my family and friends staying with me in Augusta were almost more gutted than I was. I’m a professional sportsman and you simply have to deal with missed cuts – it’s a part of life.

When I finished my second round that Friday I thought I’d made the cut. It was so blustery, and it didn’t even cross my mind I wouldn’t be around for the weekend. However, the wind died down and the smaller field in the Masters meant there were fewer players to fall backwards. I knew after two hours that it had gone against me and I was gutted. I was also disappointed at missing out on the weekend, when the course played firmer and faster. It would have stood to me in the future.

I felt my preparations were good. I was playing okay going in; I played plenty of holes in practice to get to know the place and didn’t tire myself out. I felt I did everything right in advance but just didn’t perform when it mattered. I approached the course sensibly, didn’t miss the greens on the wrong side and felt my short game was razor sharp. I just didn’t find my best game; it was probably the worst I’ve played in a year.

Admittedly, I was probably more tense than normal. I’ll learn from it. The only mistake is if you don’t learn from such bad experiences. You dust yourself down and pick yourself up after such setbacks and I look forward to many more years back at Augusta.

It’s all about moving forward now, and on to a very busy part of the season.

I head off to San Francisco on Saturday – thankfully a direct flight from Dublin – and I’m looking forward to seeing the city and especially to playing in the WGC-Cadillac Matchplay at TPC Harding Park. Hopefully, it will be the first of back-to-back weeks in the States, with The Players the following week.

My focus is on the matchplay and I’m looking forward to seeing the draw, which will be made on Monday, and to seeing who I am playing. There is a change in the format this year, with a Champions League-style series of round robin groups. My approach will be to try to win very match, because you can win two out of three and still not qualify.

There are 64 players in the field and they are all very good golfers. It doesn’t matter who you get, you have to play well enough to win. You might go out and shoot level-par and win your match, or you might shoot six-under and be beaten. The way it is with matchplay is you must beat the fellow in front of you. These are two massive weeks ahead of me and I think I can do well. It looks like I’ll have a busy summer ahead. I’d be very unlucky not to get into The Players – so my immediate schedule looks like San Francisco-Sawgrass, a week-off, then Wentworth-Irish Open, a break, and the US Open.

Although I didn’t play well at the Masters, I feel like I can do something special.