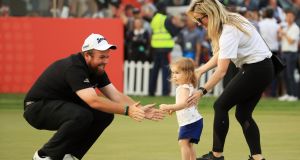 Past heartbreak proved to be a powerful weapon in Shane Lowry’s armoury, as he sealed the deal in emphatic fashion in claiming the Abu Dhabi championship for a fourth career win on Saturday.

A magnificent 3-wood approach from 281 yards to the heart of the 18th green set up a winning birdie in a closing round 71 for 18-under-par 270 and gave the 31-year-old Offalyman a €1 million payday and jumped him to the top of the European Tour order of merit.

And Lowry – who’d lost a four-stroke lead to lose out to Dustin Johnson in the 2016 US Open at Oakmont – revisited that black day to gain inspiration to complete the job on this occasion.

In admitting his breakfast hadn’t gone down quite so easily ahead of the final round, where he held a three-shot lead over South Africa’s Richard Sterne starting out, Lowry said: “The one thing I got from Oakmont is I laid down and I didn’t show any fight or bottle there . . . and I did that today!”

Lowry, for sure, showed his fortitude. Having seen that three-shot lead evaporate over the opening four holes, Lowry stood on the 12th tee in Abu Dhabi all of four shots behind his opponent in what had become a straight match play between the pair.

“I felt after the 11th hole, I was getting myself in the same situation that I got myself in Oakmont. I genuinely thought that. But I had a quick word with myself and told myself that, you know, just kick on now and just see what I can do for the next six or seven holes.

“I knew things were going well for him and he was having a good day but I just needed to stick in there. And then when I got him back to two shots, I thought, ‘he’s the one with all the pressure on him now. The pressure’s gone from me to him, and if I can just keep that pressure on him for the next few holes, you never know what can happen’.”

And, in dramatic fashion, Lowry slowly but surely ate into Sterne’s lead to the point where he reached the 18th tee on level playing terms. For that, he’d demonstrated all of his short game wizardry on the 17th hole, where a six-iron approach from a fairway trap missed the green. He pitched to 12 feet, and then let his putter finish the job by rolling in the crucial par save.

“I hit a great putt and it actually, six feet out, I thought, this is definitely in. Then it just started to wiggle left and it just caught the left edge,” he recalled.

On the Par-5 18th, Lowry’s drive left him with 281 yards to the green. Sterne, some four yards shorter off the tee, hit first and, forcing his shot, missed the green right.

“I knew Richard only had a 5-wood in his bag and had no 3-wood. He would have had 285 yards to the flag, so I knew he couldn’t really get it there and it was a perfect 3-wood for me.”

Lowry’s win – his first since the WGC-Bridgestone Invitational in 2015 – ended a three-and-a-half-year winless drought and, he acknowledged, similar returns to the winning enclosures by Lee Westwood (in the Nedbank) and Danny Willett (in the DP World Tour) last season provided some inspiration.

“I think you look at Westy and Danny Willett at the back end of last season and you see what they did and they came back, you don’t know when you’re going to win again. It’s so hard to win out here.

“I knew I had been playing all right in the last couple of weeks – in my preseason – but I didn’t really envisage this to be honest.”

Lowry’s preparations for Abu Dhabi involved heading out to UAE early, sharing a house with fellow tour player Paul Dunne, and playing extensively in Dubai where he also had his coach Neil Manchip with him.

“I had great chats with my coach, Neil, this week about hanging in and staying in there no matter what I do and no matter what I shoot and what shots I hit, just keep going,” said Lowry. “It definitely helped me out there today.”