Sergio Garcia out of The Masters after positive Covid-19 test 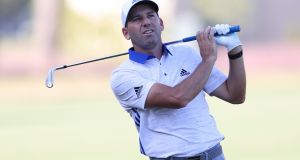 Sergio Garcia has been forced to withdraw from the US Masters after testing positive for Covid-19. Photo: Carmen Mandato/Getty Images

The Masters has suffered a high-profile Covid-19 withdrawal after Sergio García, the 2017 champion, returned a positive test. García revealed he felt ill when travelling to his home in Austin from the Houston Open on Saturday evening. Confirmation of his non-appearance at Augusta National was delivered on Monday.

“I started feeling a bit of a sore throat and a cough,” García explained. “The symptoms stayed with me on Sunday morning so I decided to get tested for Covid-19 and so did my wife Angela. Thankfully she tested negative, but I didn’t.

“After 21 years of not missing a major championship, I will sadly miss the Masters this week. The important thing is that my family and I are feeling good. We’ll come back stronger and give the Green Jacket a go next April.”

This clearly marks a blow to the event’s organisers, who confirmed in a brief statement that García “has informed Augusta National Golf Club that he will not participate in the 2020 Masters Tournament due to a positive Covid-19 test result”. Although there is no suggestion of a connection, the Houston Open was played against the backdrop of the biggest galleries of the PGA Tour’s resumption. The Masters of three years ago marks the 40-year-old García’s only major win to date.

The young Chilean Joaquín Niemann was removed from the Masters last week after a positive coronavirus test. This major does not permit reserves, meaning the field has been reduced to 92 players. Augusta National also announced on Monday that, in order to afford themselves extra time to complete weekend rounds, the 10-shot rule, where those within 10 strokes of the leader after the second round, would make the cut, has been dropped. Only the top 50 players and ties will qualify for rounds three and four.